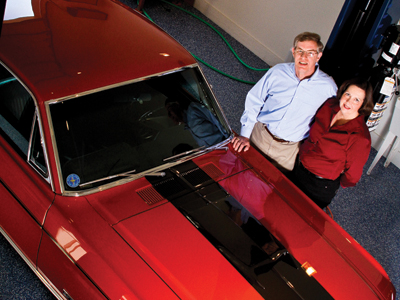 With their two sons grown and on their own, George, ME’74, and Joy Stegner were determined to find a hobby they could enjoy together as empty nesters. They decided to buy a classic Mustang and join a club.

“When George and I made the decision to buy a car, we weren’t initially looking for a particular year,” says Joy, who remembers carpooling with her friends in the back of her neighbor’s brand new 1965 Mustang. It took several months, but in the late 1990s they eventually bought a 1968 Brittany Blue coupe. They enjoyed it so much that two years later they bought a red and black 1968 convertible for Joy.

Joy isn’t the only one with fond memories of the “pony car.” Just before George turned 16, he remembers spotting a 1967 Shelby being driven through his hometown.

“I was riding a bicycle,” he remembers. “All the cool kids in high school were driving Mustangs, Camaros, Chevelles, GTOs, and I got to drive my dad’s old 1959 Chevy Nomad station wagon. Not cool.”

“All the cool kids in high school were driving Mustangs, Camaros, Chevelles, GTOs, and I got to drive my dad’s old 1959 Chevy Nomad station wagon. Not cool.”

Their nest continued to fill with the purchase of a third Mustang, a 1968 GT convertible, a gift for George’s 50th birthday.

“Based on the production statistics, the blue ’68 convertible is one-of-one,” he says. “It’s the only car I have with the original build sheet and it’s a matching-numbers car.”

In addition to their first two convertibles, you’ll find a whole herd of Mustangs inside their custom-built garage in Kearney, Mo., including a limited-edition 1968 GT Fastback with a 428 Cobra Jet engine, a 1968 Shelby GT500KR, a 2005 GT convertible, and a 2008 Roush 427R.

“I like things about each of the cars, but my red ’68 convertible will always be my favorite,” Joy says. “It’s everything I could want.”