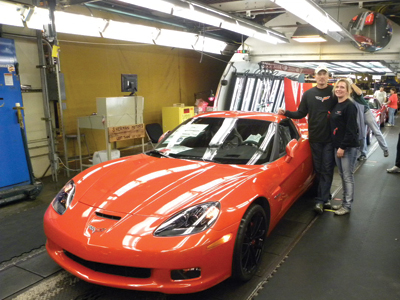 Greg Bier, EMgt’86, MS EMgt’95, PhD EMgt’97, and his family have owned three Corvettes. But the 2012 Z06 is the special one. That’s the one that Bier built with the help of his wife, Karla, ChE’88, MS ChE’94, PhD ChE’98; son Brandon, EMgt’10; daughter Kirstin, a freshman in chemical engineering, and daughter Bridget, who is seriously thinking about enrolling at S&T in the fall of 2013.

The Biers hand built the 7.0-liter, 505-horsepower engine at Chevy’s Performance Build Center in Wixom, Mich., as part of the company’s Engine Build Experience. Z06 Corvette engines are normally hand built, but as an option, you can go to the facility and build it yourself, under the instruction and watchful eye of the professionals.

“We were the 21st Corvette owners, the first family, and the youngest builders to ever do this,” Bier says.

A few weeks after the engine was completed and tested, it was sent to Bowling Green, Ky., where the Corvettes are assembled.

“We started with just an aluminum frame and three days later, Karla was the first to start the car.”

“Karla and I walked down the assembly line with our car over three days,” Bier says. “We started with just an aluminum frame and three days later, Karla was the first to start the car.”

Once the car was assembled it was transported to the National Corvette Museum in Bowling Green, where it sat on display for about a week.

“When it was time to pick our car up, we drove to the museum and took delivery of the car while family and friends watched on webcams the museum had set up on the car.”