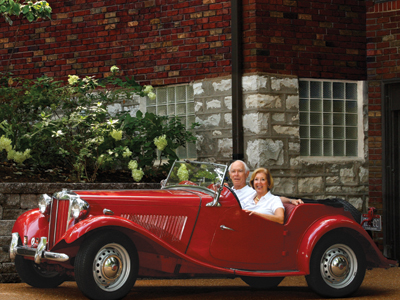 Love at first sight isn’t something that happens only between people. In 1952, the U.S. Air Force stationed Milton Hiekenin southwest France, where he bought his first car, a 1953 MG-TD Roadster.

After he returned to the U.S., he brought the car back home to St. Louis, keeping it just one winter before selling it.

“It is a lot of fun to drive when the weather is right, but the MG is not a very comfortable all-season car,” he says.

Over the next several years, Hieken tried out other cars, including an MG-A coupe, an Austin Healey 3000-6 and a couple of different Porsches. But his affinity for the MG, “a true ‘sports car’ classic,” remained.

“It is a lot of fun to drive when the weather is right.”

Fast forward to 1992, when he met Barbara, a widow who would become his wife. As they were talking, the subject of cars came up and she mentioned she had a two-seat MG roadster.

“Their good friend was a Ford dealer in Litchfield, Ill.,” Hieken says. “In 1957, a 1952 MG Model TD was being driven from Chicago to someplace when it broke down in Litchfield. The original owners decided to sell it and move on.”

Barbara’s first husband bought the car from the Ford dealer and worked with a mechanic to get it running. Five years after her husband passed away in 1977, she brought the car back to her dad’s house, where it remained on blocks until 1994.

“When we got married, we decided we ought to do something with it,” Hieken says. “It took some professional work to get it running again. Those cars are very persnickety.”

Hieken retired from McDonnell Douglas as a laboratory branch chief in 1995. He received a professional degree in engineering mechanics from Missouri S&T in 1975.