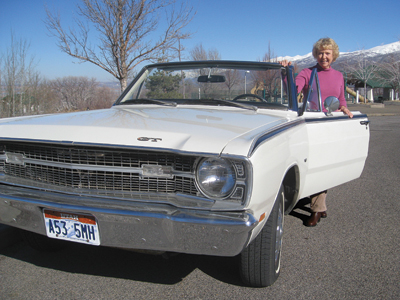 Since she was a young girl, Nicola Utterback Nelson, EE’66, MS EE’71, has wanted to own a convertible.

“I always thought they were glamorous and sophisticated, driven by movie stars,” she says. “I wanted to be Sandra Dee, I guess.”

Her wish came true in 1968, when Nelson and her then-husband, Donald R. Nelson, MS EE’66, PhD EE’73, purchased her first and only convertible, a 1969 Dodge Dart GT.
Many car enthusiasts might not think of the Dart as a “glamorous” ride. Reliable, yes. But it wasn’t a luxury car, nor was it a classic muscle car like the Chevy Camaro, Pontiac GTO or Dodge’s own Charger.

But if most Darts were humble vehicles, the ’69 GT model was an exception. With a 318 horsepower V-8 engine and four-speed manual transmission, Nelson’s car matched up well with the hot rods of that era.

“I wanted to be Sandra Dee, I guess.”

Plus, her Dart was a convertible. For Nelson, that’s what mattered most.

“It’s the convertible I’ve always wanted,” she says. It’s also special because 1969 was the final year Dodge made Dart convertibles.

More than 40 years later, Nelson and her Dart have traveled from Rochester, N.Y., where she bought the vehicle, to California, New Jersey, Virginia and now, northern Utah. “I just never saw any reason to sell it, as it has been a reliable car,” Nelson says.

Now a semi-retired systems engineer from the Aerospace Corp. of El Segundo, Calif., Nelson drives the Dart only during warm weather. Otherwise, she’s behind the wheel of a Toyota Sienna minivan. It’s good for hauling around skis, bicycles “and all my sisters and brothers-in-law when they come to town.”

Recently, Chrysler announced plans to revive the Dart nameplate on a new compact car. Perhaps the model isn’t so forgettable after all.