Taylor Keal: in the game 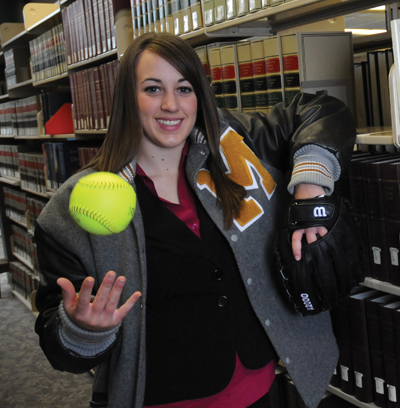 When she is not on the field, Keal, a native of Blue Springs, Mo., is preparing for a career as a lawyer. She is currently a junior majoring in business. (Photo by B.A. Rupert)

Taylor Keal has been a softball pitcher since she was 10 years old. But she cannot remember being a part of anything like what she experienced on April 10, 2011.

On that day, she was a part of the longest home game in Missouri S&T history as the Lady Miners defeated Quincy 4-3 in 17 innings in the second game of a doubleheader. The game was also the second-longest in school history, and Keal tied the record for most innings pitched in a single contest with 13.

Keal shut down the Hawks and their three-time All-American Torie Bunzell in the first game that day, winning 3-0 behind a pair of home runs by Maggie Schroeder. During the second game she was sitting on the bench watching as the game was tied 1-1 headed into the fourth.

“I started getting the sense I was going to be needed, judging by the way the game was going,” she says. “Coach (Don Kennedy) came up to me and asked if I had anything left and I said I had about two or three innings in me. I didn’t dream of pitching 13 innings but the adrenaline took over and I kept putting up zeroes. The only pitches I had command of were my fastball and changeup.”

In the top of the 17th Quincy scored a pair of runs to take a 3-1 lead, but S&T scored three in the bottom half to win the game.

“I was happy we won the game. I don’t know if I ever pitched that many innings in a day and I once played five games in a day,” she says. “It’s something I’ll never forget and it was neat to be part of a game like that.”