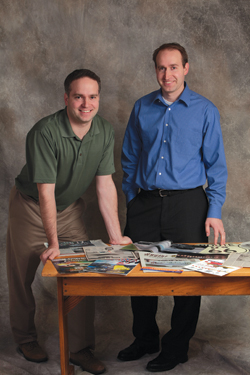 Why support S&T?: “I got a lot out of being on the Solar Car Team, including two trips to Australia, so I want to repay some of it,” says Nathan Rues, ME’02. His brother, Aaron Rues, EE’01, agrees. “I can’t tell you how many weekends I spent at the design center working on the solar car. I give back to stay connected to S&T.”

Growing the team: The first to join the team in 1997, Nathan recruited Aaron and many of his own Phi Kappa Theta fraternity brothers in 1998. Both remained on the team until graduation.

Is this corner taken?: “It was more difficult back then for design teams, there was no space for us,” says Nathan. “I remember pushing the 1995 and 1997 vehicles from the old bread company (now the Kummer Student Design Center) to a corner of a room in the Bureau of Mines Building to claim the space. Before this, we had a mish-mash of stuff all over campus.” By the time Aaron joined the team, they had moved to the metal garage that was home until the new facility opened in 2011.

Life lessons: “We dealt a lot with worn out components on the road and spent a lot of time inspecting the vehicle,” says Aaron, now an engineer with Allison Transmission Inc. in Indianapolis. “I learned the importance of making things durable. Now I make reliable products, not throwaway components.”

“It’s not always the best design that wins — but the design that is known best,” says Nathan, now a hybrid/electric powertrain engineer with General Motors, also in Indianapolis. “Through testing, we knew exactly what our cars could do on the race … and did it.”

Why students should join design teams: “Engineering studies only take you so far; everyone else is taking the same courses,” says Aaron. “On a design team, you learn to apply knowledge to real-world problems.”

“The competitions offer real-world restraints with high pressure — you learn to think fast. Many problems are too big for you to fix on your own, so you learn to work with others,” says Nathan. “These conditions are hard to simulate outside of a competition.”