For most S&T students, getting out in the “real world” after college means getting that first job. For Nathan Stodghill, real-world experience has an entirely different meaning. 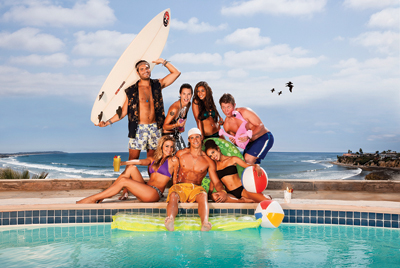 S&T’s own Nate Stodghill (far right) and his fellow cast members on The Real World: San Diego spent three months getting to know each other while living in the San Diego suburb La Jolla, Calif. (Photo courtesy MTV)

Last spring, the former nuclear engineering student tried out for a role on MTV’s Real World television series. He was picked and spent the summer on the cast of The Real World: San Diego. The series began airing last September. Stodghill was also cast as part of the MTV Real World/Road Rules spin-off series The Challenge: Battle of the Exes, which premiered in January.

The former S&T football player from Grain Valley, Mo., created a website, The Living Memoir, to help raise awareness about teen suicide and “as an outlet for people to express how they feel in a time of crisis.” Learn more at thelivingmemoir.com. You can also follow Stodghill on Twitter at @MTVNate.