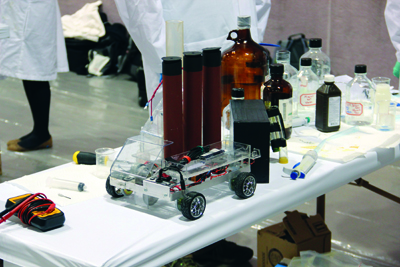 The ChemE Car placed third in a national competition for vehicles powered solely by chemical reactions.

A group of chemical engineering students took third place in the nation in a competition that required them to design and construct a shoebox-sized car capable of carrying a specified load over a given distance and then stop. Sounds easy, but there’s a twist.

The car — dubbed the ChemE Car — was powered, and braked, purely by chemical reactions.

Powered by a custom-built lead-acid battery, the car’s braking system was controlled by an iodine clock reaction that caused a change in colors. To get the car to stop, varying amounts of sulfuric acid, potassium iodide, hydrogen peroxide and sodium thiosulfate were used with a starch solution. Changing the ratio of reactants changes the color of the solution. A fiber-optic photo sensor detects that color change, and trips a relay to cut power to the car’s motor.

This year’s car had to carry 350 milliliters of water a distance of 68 feet. S&T’s entry stopped 5 1/2 inches from the finish line — just behind the University of Puerto Rico Mayaguez and the University of California-Davis, says team advisor Daniel Forciniti, professor of chemical and biological engineering.

The competition was part of the annual meeting of the American Institute of Chemical Engineers, held in Minneapolis in October.