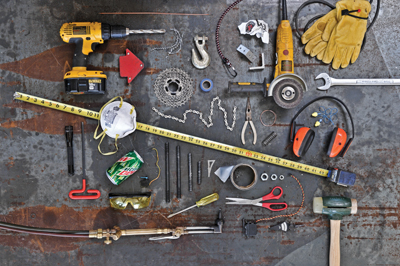 Design center students work with high-tech equipment and computer models. But they are also familiar with some of the more conventional trade tools and other stuff associated with making machines. These are just some of the items we found scattered about. Note that it’s nearly impossible to find a full roll of duct tape … (Photo by Bob Phelan)

In the prefabricated metal structure that used to house S&T’s design teams, space heaters kept things relatively warm in the winter. Big fans helped ventilate it in the summer. The place famously had no restroom facilities.

Huge model airplanes hung from the rafters. A sense of claustrophobia was pervasive. During any given part of the year, the Solar Car Team was working on an electrical problem, the Human-Powered Vehicle Team was having design issues with its windshield and the Steel Bridge Team was welding beams.

“The steel bridge guys would be welding and we’d have to dodge these molten blobs to keep from getting burned,” says Ross Jensen, a junior in mechanical engineering on the Human-Powered Vehicle Team.

The teams, of course, made the most of what they had. National championships from the Solar Car Team and the Human-Powered Vehicle Team have been well documented, and the Formula Car Team has been very competitive at the international level. But in recent years, some of the successes — at least as defined by performance in competitions — began to diminish as the teams outgrew their main working facility.

Last year, for instance, the Human-Powered Vehicle Team finished second in both of its competitions. That is impressive — except for the fact that they were used to winning. “Our vehicle was light years ahead of the others in 2011, but we didn’t finish it until eight hours before the competition,” says Jensen. Competing with other teams on campus for space and time in the crowded facility meant fewer opportunities to test vehicles before a competition.

Meanwhile, the Advanced Aero Vehicle Group crashed its plane and the concrete canoe cracked. Lots of duct tape was used. Most team leaders agree that the amount of time spent on testing S&T’s various design team contraptions correlates directly with the chances of performing well in a competition — and there wasn’t enough time for some of the teams. Or enough space.

This year things are different. Very different. A sparkling 21,400-square-foot facility is now home to S&T’s student design teams. The Kummer Student Design Center has offices, meeting rooms for all the teams and staff, lots of technology and equipment, and, of course, clean restrooms, as well as modern heating and cooling systems. There’s even space for retail businesses — including a Jimmy John’s and a Spoon Me yogurt shop — in the front of the facility, which is located where the old Holsum Bread Bakery and then the Student Rec Center used to be. In the main part of the building, there are plenty of spacious, well-lit areas for the students to work.

Suddenly, the teams are rejuvenated. The Concrete Canoe Team, for example, was two months ahead of last year’s pace at the time of this writing. S&T’s student design teams were officially organized in April of 2000 after some of the teams had already built strong programs. Recognizing the need to help, a group of graduates led by Richard “Dick” Arnoldy, CE’69, Robert “Bob” Brinkmann, CE’71, and Barry Koenemann, CE’70, started raising money for a new facility. Fred, CE’55, and June Kummer made a naming gift that made it possible to go ahead with the $2.5 million renovation of the building on the corner of Bishop Avenue (U.S. Highway 63) and 10th Street. The new facility was dedicated on May 20, 2011.

“With the new facility, we’ve been able to acquire equipment we never had space for.”

“With the new facility, we’ve been able to acquire equipment we never had space for,” says Paul Hirtz, EMgt’95, MS EMgt’97, PhD EMgt’02, associate director of the center.

A tall rocket, two human-powered vehicles and two dune buggies belonging to the Baja Team stand in one of the main working areas of the Kummer Student Design Center, along with other projects in the works. Yet there’s plenty of room to move around.

Of course, there are still costly logistical challenges. The Baja Team, for instance, is traveling to competitions in Oregon, Wisconsin and Alabama this spring. And the only place the Formula Car Team could find that is big enough and accessible enough to test their vehicle is the parking lot of the Hearnes Center in Columbia Mo., an hour and a half away.

But for most of the students, who also have a lot of class work, all of the time and effort on design team projects pay off.

“Take out sleep and you’re good to go.”

“Take out sleep and you’re good to go,” says mechanical engineering senior Miriah Anderson, a member of the Robotics Team who has already landed a job with National Instruments in Austin, Texas, even though she won’t graduate until May.

According to Jensen, students who don’t join design teams are missing out on opportunities to demonstrate the viability of new technologies by “learning how to manufacture what they design.”

Students on design teams learn leadership and problem-solving skills “on the job” as they plan, finance, design and implement real-world projects. In addition to competing against their peers from universities across the nation, design team members gain technical expertise and learn critical business skills.

The students who participate also learn valuable lessons associated with teamwork. “With a test in class, it’s your responsibility,” says David Conradi, a senior on the Formula Car Team. “When working with a design team, if you fail, you are letting others down.”

Two of the teams that officially belong to the center conduct their business off-site (three if you count the Formula Car Team, which usually works on its vehicle elsewhere). The Solar House Team, of course, needs open space to build its homes. S&T’s Solar Village is located on land just west of the new Kummer Student Design Center. And then there’s the S&T chapter of Engineers Without Borders (EWB), the largest group and the only team in the center that isn’t involved in any kind of formal competition. EWB students travel to countries in Central and South America to assist with water problems.

Grace Harper, a senior in geological engineering, has been to Honduras twice with EWB, and she wants to go again. “It becomes more about the personal connections — the people — than the project,” she says.

While most of the students on design teams concentrate on learning and trying to make the world a better place in some way, it’s important to have fun as well. “We could build the thing out of hemp or something, but it’s nice to just be able to make a car that goes fast,” says Thomas Fears, senior in mechanical engineering, of the Baja Team.

“We could build the thing out of hemp or something, but it’s nice to just be able to make a car that goes fast.”

That sentiment fits the motto of the center’s director, Roger LaBoube, CE’70, MS CE’73, PhD CE’77: “Learn, succeed, have fun.” And the enhanced ability for many students to learn, succeed and have fun in a positive environment was largely made possible by the Kummers.

“Missouri S&T’s student design teams have an incredible record of success, and our students deserve to work and conduct business in a facility that provides the best laboratory and work space possible,” says Fred Kummer. “June and I are very pleased to be able to provide this support for such a world-class student operation.”