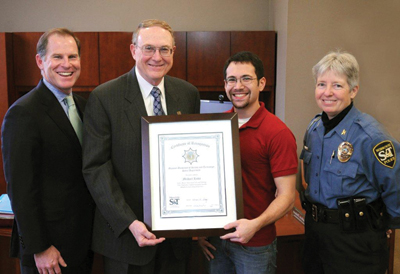 Metallurgical engineering graduate student Michael Kuba, MetE’10, was walking with a friend in a campus parking lot during finals week when he noticed a credit union envelope on the ground. Inside the envelope — $500 cash.

In January, University Police Chief Christine Laughlin honored Kuba with an award for his honesty. It was presented by Laughlin, interim Chancellor Warren K. Wray, and Timothy M. Wolfe, president of the University of Missouri System.

“This student did something exceptional,” Laughlin says. “He reflects the caliber of students on this campus.”

Kuba says he knew how he would feel if he’d lost that much money, but doesn’t think turning it in is that big of a deal. “I’d like to think anyone in our department would do the same thing — we’re a very close-knit group.”