Hail to the (past) chiefs 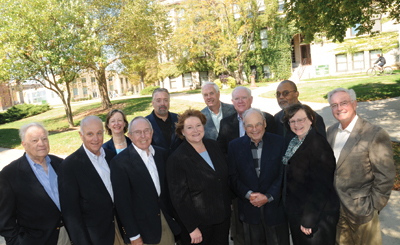 It’s pretty easy to pick out the past presidents at any meeting of the Miner Alumni Association board of directors. They’re the ones seated together in the back corner of the Havener Center meeting room, where the directors gather for their spring and fall meetings.

That ritual dates back to the mid-1970s, says Robert M. Brackbill, MinE’42, who served as association president from 1974 to 1976. During his tenure only two former presidents — James J. Murphy, CE’35, and Peter F. Mattei, CE’37 — routinely attended the meetings. But they made their presence known.

“Those two guys sat back there and kibitzed me all the time,” Brackbill says. “Back in those days, we would listen to them. These days, the board couldn’t care less about our opinions, and I don’t blame them, for we elderly Miners have a habit of embellishing the good old days.”

Brackbill is exaggerating, of course. The collective voice of the association’s past presidents remains influential, and their advice is welcomed. “The institutional knowledge the past presidents bring is very helpful to the board and executive committee,” says Larry L. Hendren, MinE’73, who was association president from 2004 to 2006.

Current president Susan Hadley Rothschild, CSci’74, agrees. “There are no other people who care more about the Miner Alumni Association and S&T than the past presidents,” she says. “They are an inspiration to me, and I hope to others on the board.”

Like the association itself, the role of past president has changed through the years. No longer mere “kibitzers,” former presidents remain active on alumni board committees and as advocates for Missouri S&T. Many have also served on the S&T Board of Trustees, which advises the chancellor on university matters.

“The past presidents are here to help the current board and to give advice in the proper way to the new crop of officers,” says Gerald L. Stevenson, ChE’59, who served the association as president from 1994 to 1996. Even more important, he says, is their role as ambassadors for the university. “We should also promote the very good things that the university is doing” to those outside the campus, Stevenson says.

Under Brackbill’s leadership, the alumni association evolved into a more professional organization with an expanded purpose. Newer leaders, like Stevenson and Hendren, took on new challenges to help the university thrive and keep alumni connected. Under Stevenson’s leadership, the association developed its mission and vision statement as part of a quality improvement process he helped initiate. Hendren focused on improving legislative relations during a time when state funding for higher education was declining. He also served on the search committee that brought former Chancellor John F. Carney III to campus.

What keeps the circle of past leaders connected to the alumni association through the years? Brackill, now the elder statesman of the group, sums it up in one word: friendship.

“Friends have made my life beautiful,” he says. “A lot of those friendships were made in college, and I made a lot of friends through my alumni work.”

Hendren agrees. “We enjoy the interaction” with newer board members, he says. “We just have a passion for the institution and the alumni association.”

For Stevenson, the greatest satisfaction comes from getting younger alumni involved in leadership positions. “It’s one of the very best things that has happened to me in my life,” he says. “I’m very pleased to have helped in some small way by serving as president, and involving other alumni in the organization.”