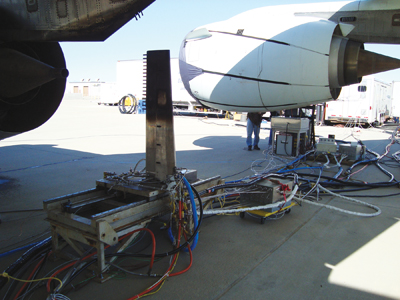 Using equipment that captures and measures exhaust, the researchers tested biofuels in the same type of engine used by a Boeing 737.

In a study published in the journal Environmental Science and Technology, Lobo and his fellow Missouri S&T researchers tested two types of alternative jet fuels: biofuels made from vegetable oils, and fuels made with the Fischer-Tropsch process, which creates liquid hydrocarbons from coal, natural gas or biomass. Using equipment that captures and measures exhaust, the researchers tested the fuels in the same type of engine used by a Boeing 737, measuring at different power levels to simulate an airplane’s taxi, takeoff, climb and descent.

They found that the more alternative fuel they blended with the jet fuel, the lower the particulate matter emissions. But they also discovered that the only fuel that was a viable alternative was a 50-50 blend of Fischer-Tropsch fuel and jet fuel. It maintained adequate engine power for commercial or military use and it reduced particulate matter mass emissions by 39 percent.

Lobo, assistant director of the S&T Center of Excellence for Aerospace Particulate Emissions Reduction Research, was the lead author of the Environmental Science and Technology paper. Co-authors were Philip Whitefield, interim vice provost for academic affairs, professor of chemistry and director of the center, and Donald Hagen, professor of physics and a researcher at the center.