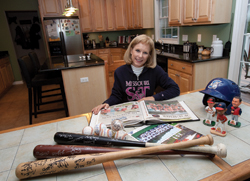 Helene Hardy Pierce in her kitchen looking through her scrapbook collection of articles. She has collected a multitude of memorabilia from over the years, including a collection of signed baseballs, bats, helmets and bobble heads. (Photo by Danielle Austen)

A big fan of St. Louis Cardinals baseball, Helene Hardy Pierce, EMgt’83, was very excited when, after moving to New Jersey, she found out the Cardinals had a Single-A Short Season team that played at a minor league stadium 10 minutes from her home. During the first game she attended with her husband in 2002, the team announced over the public address system that it was still looking for host families. “We called, and a day later, three guys moved in,” Pierce recalls. “The following year, there were four players.”

Pierce and her husband, Riley, hosted players for nine summers. This is the first year without a local team, but Pierce thinks a new one will come to the area in 2012.

“More than 50 players stayed in our home during that time,” says Pierce, who is vice president of technical services, codes and industry relations for GAF, a large roofing manufacturer. “The team knew we were flexible. New players would often just show up at our house until their own host family arrangements could be made.” One player from the Dominican Republic even moved his wife and their two young children into the home for three weeks.

Although major league players make huge salaries, and high draft picks get big bonuses, most minor leaguers exist on meager wages. Odds are they’ll never make it to “The Show” (Major League Baseball). Pierce and her husband never charged their guests rent, and they kept the pantry full.

Pierce cooked on Saturdays and Sundays, when the team was in town. Word got out that she knew how to barbecue a brisket, or bake lasagna, pies, cakes and cookies — and “extra guys” were liable to show up.

“It was actually a match made in heaven because I could also bake and they devoured anything I made,” Pierce says.

One of the players who showed up at the house was Brendan Ryan, who played for the St. Louis Cardinals from 2007-2010 before moving on to the Seattle Mariners. “He was a very nice young man,” Pierce says. “Many who played with him are still happy that he made it because he was never an ego guy.

“Everyone who lived in our home was gracious and kind, realizing that we had opened it to them, and they respected that,” says Pierce. “And over the years, we’ve stayed in contact with many of ‘our’ players. Out of the clear blue, we’ll get a phone call or text message, just to say hello.”