Into the danger zone 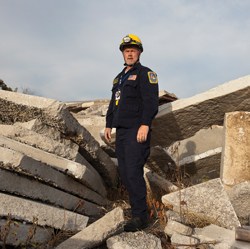 Recently, while deployed in Joplin, Mo., Steve Winters, PetE’83, was reminded of Sept. 11, 2001. “After the tornado,” he says, “the smell of wet concrete dust brought an immediate flashback to the smells in New York.”

By day, Winters is the associate director for student information systems at the University of Missouri-Columbia. But he’s also a volunteer with Missouri Task Force 1. Managed by the Boone County Fire Protection District, Missouri Task Force 1 is part of the Federal Emergency Management Agency’s Urban Search and Rescue Response System.

The task force uses the skills of people who have expertise in various areas. In addition to using his technical talents to operate “electronic victim detection devices,” Winters leads a small team with canine search capabilities.

Winters first heard about Missouri Task Force 1 in 1998 during a presentation at a local meeting of the Optimist Club. He applied and was accepted in 1999.

“FEMA received presidential orders and activated MO-TF1 around noon on Sept. 11, 2001,” Winters says. “We traveled by school bus to Whiteman Air Force Base for in-processing. … We were loaded and flown out of Whiteman in the late evening of Sept. 11 on three National Guard C-130 aircraft.”

After arriving at McGuire Air Force Base in New Jersey in the early morning, the team was moved into Manhattan. According to Winters, MO-TF1 had boots on the ground at Ground Zero in the afternoon of Sept. 12.

The task force worked continuous 12-hour shifts for the next nine days.

Sadly, the last live victim rescued from the rubble in New York was found around 12:30 p.m. on Sept. 12. But Winters and Missouri Task Force 1 aided in the detection, location and recovery of bodies.

In addition to being deployed to New York in the wake of 9/11 and to Joplin following the recent tornado, Winters also spent 16 days in New Orleans after Hurricane Katrina struck in 2005.