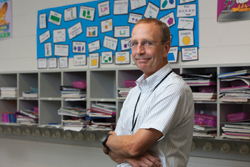 Jerry Rich, EE’74, in his classroom. (Photo by Jeff Amberg)

In 2004, Jerry Rich, EE’74, took early retirement from a 30-year career as an electrical engineer with Eastman Chemical Co. and went back to school to become a teacher. After a couple of prerequisite courses at a local technical college, Rich entered a “career changers” program at the University of South Carolina. His first year of teaching was 2006.

“This is my sixth year of teaching fourth grade at White Knoll Elementary,” Rich says. “I teach math and science and like to think that I am training future engineers.”

Before Rich retired from engineering, his sister lent him a book by Bob Buford titled Halftime: Changing Your Game Plan from Success to Significance.

“I read the book and realized that, in the eyes of many people, I had probably been fairly successful,” Rich says. “But was I really significant in the lives of others? After a couple of years of contemplation, the opportunity to make a change led me to pursue a teaching career.”

Teaching is in Rich’s blood. Both of his parents were longtime teachers. His mother began her career in a one-room country school that housed eight grades. In high school, Rich took a science class his dad taught.

“I decided that younger students have not yet learned how to misbehave, and maybe that is whereI belonged,” Rich says.

In his spare time, Rich runs — a lot. Later this year he plans to run the Kiawah Island Marathon in South Carolina. It will be his 52nd.

“A friend of mine told me that when you turn 40, your body begins to fall apart,” Rich says. “I refused to believe that and decided to do my best to prevent it. So far, I have run 51 marathons. One in each state and one in Washington, D.C.”

All that running seemed like a natural progression for Rich.

“In 1993, I took a little trip around 48 states and managed to go inside all the state capitol buildings as well as Washington, D.C.,” Rich says. It was a 15,000-mile journey that took a month to complete.

“Years later, the idea of running a marathon in each state seemed to be a natural (at least to me) follow-up,” he says. “I made sure to visit the capitol buildings when I ran my Juneau, Alaska, and Honolulu, Hawaii, marathons.”

Both running and teaching help Rich find significance in his life.

“The most rewarding part of teaching,” Rich says, “is when a struggling fourth grader looks up at me after a one-on-one math session, smiles, and says, ‘Oh, now I get it.’”

When he began his quest for significance, Rich set a goal of teaching for five years. At the end of that five, he decided he could survive five more years.

“I guess that gives me four more years to determine my next career,” Rich says. “Real retirement, whatever that is, is probably not one of the options. Fourth graders help you stay young.”