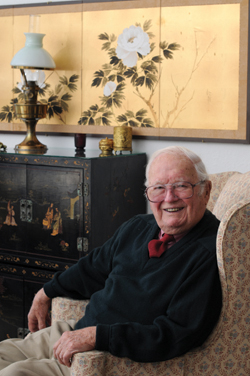 When he eventually made it out of the danger zone that day, John Allen went looking for a British ship — because they had the good scotch. Like many in his generation, he’s reluctant to talk about it. The last thing Allen wants to do is make a big deal about his role in the invasion. “I just happened to be one of the guys who lived through it,” he says.

He’s referring to Normandy, of course. D-Day. On the morning of June 6, 1944, Allen, GGph’42, MinE’47, was in one of the first boats to reach the coast. His job was to help place charges that were designed to blow up the underwater barriers the Germans had rigged along the shoreline. If Allen and the other demolitions guys were successful, the allied forces still out in the channel would have a much easier time making land. With the beach in sight, Allen and his crew waded the remaining distance. Apart from the explosives they were carrying, he doesn’t remember for sure if they were even armed. “We had one job to do,” he says.

Meanwhile, Air Force planes had been relentlessly targeting the Germans, who were up on the cliffs; and, for a while, it looked like things might go really well. But, as things turned out, there would be plenty of resistance, lots of artillery raining down.

In the most dangerous of situations, Allen and his explosives partners, 10 of them, did their job that Tuesday morning. They placed their charges and helped clear the way for the allies to reach the beaches of Normandy. Eight of the 10 people Allen was working with were wounded or killed in the process.

After the war, Allen came back to Rolla on the G.I. Bill. He already had one degree — this was where he got his explosives experience in the first place. But he had a met a “Rolla girl,” so he pursued a second degree in mining engineering. With that diploma in hand and a new wife, Helen “Chili,” Allen went back to the mines for a while and then returned to military life. He became a career officer in the Navy, putting in more than 20 years.

“I just happened to live through it.”

Stationed for a time at Pearl Harbor, Allen was the resident officer in charge of the construction of the Arizona Memorial. As is the military custom, the family went from assignment to assignment and place to place, including Turkey, where Allen helped build-up post-war facilities.

After retiring from the Navy as a commander, Allen took a position with an architectural engineering firm based in Los Angeles, directing overseas contracts in 17 countries.

Eventually, Allen and his wife came back to Rolla for good. Now in his 90s, Allen is into aquaculture (fish farming) and alternative sources of energy (he’s been studying liquid fluoride thorium reactors). He follows what’s happening on campus. And he still enjoys a good scotch.

Allen doesn’t mind talking about the places he’s been and ideas that continue to intrigue him. In fact, he enjoys the conversation. But he wants you to know that he didn’t do anything special on that day off the coast of France, that he was one small part of a very big effort. Getting this point across is very important to him. “I just happened to live through it,” he insists.