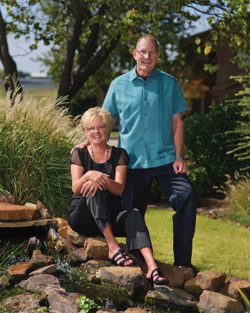 “In the almost 40 years since the new building appeared, time has taken a toll on both the old and new buildings,” Pahl says. “The labs are falling behind the times and more space is needed.”

Pahl and his wife, Ginny, recently contributed $250,000 toward construction of a new chemical and biological engineering building at Missouri S&T. The university plans to name the building for Jim Bertelsmeyer, ChE’66, who gave the lead gift for the project.

The project is an important one to the Pahls.

“Ginny and I felt strongly about the need for the new building and the value that Missouri S&T provided to me in my career,” says Pahl, who retired in 2004 following a 30-year career with Phillips Petroleum. “The new building will help the chemical and biological engineering department become one of the best in the nation.”

Pahl says he and Ginny are a part of the Missouri S&T family and want to help in any way they can. And help they have. A member of the Academy of Chemical Engineers, Pahl has coordinated reunions for his class, recruited for Phillips and spoken at campus lectures. Ginny is on the board of directors for the Order of the Golden Shillelagh and Pahl is on the Provost’s Engineering Advisory Board.

“We started to give back to the university as soon as we were financially able,” Pahl says. “I arrived in Rolla in September 1964 as a wide-eyed freshman in chemical engineering and left nine years later with three degrees, all in that department,” Pahl says. “Ginny joined me in 1966 to continue her education in the math department. While she did not finish her degree, we both feel Missouri S&T is ‘our’ university and continue to support it.”