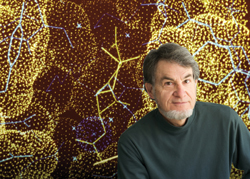 James Knox with a background image of penicillinase, the bacterial enzyme he and his lab mapped from X-ray data. Photo by Kim Bova.

A professor emeritus of molecular and cell biology at the University of Connecticut, Knox has spent his career illuminating these microscopic enemies. In the 1980s and ’90s, the research he conducted in the X-ray diffraction laboratory at the university’s Institute of Materials Science was the first to show penicillin bound to its bacterial target enzyme.

His research was also the first to establish the molecular structure of other enzymes that provide penicillin and vancomycin-type antibiotic resistance.

Knox says investigations were published in the journal Science and were covered by major news organizations. They led to more than 100 invitations to speak around the world.

Knox says his molecular imagescontinue to be used by pharmaceutical and academic scientists to understand antibiotic action and mutational changes, and to design new antibiotics.

“In the old days, it was trial and error — just testing whether a chemical killed the bacteria or not,” Knox says. “Now we can get an atomic-level picture of the enzymes’ molecular structure, then the drugs can be rationally designed to interact with them.”

His archived X-ray data and enzyme structure images are available for free from the Protein Data Bank. “They’ll still be there in 100 years,” he says. “As their methods of analysis grow, scientists and chemists will have new ways of using our basic data in their design of future antibiotics.”