The Miner swimmers placed ninth at the national meet in San Antonio, which included a third-place finish by senior Zlatan Hamzic in the 200-yard breaststroke and a school-record performance by the 400-yard medley relay team. Hamzic, who won the national championship in the event two years ago, rallied from a seventh-place spot midway through the race in the finals to end up third with a time of 1 minute, 58.15 seconds — just 0.13 seconds off the school record he set when he won the national title in 2009.

Hamzic was also part of the relay team with sophomores Sean Deegan and Jacob Dole and senior Andrew Schranck that posted a time of 3 minutes, 17.48 seconds in the 400-medley relay to break the school record set at the national meet in 2009. That relay team finished seventh overall and was among the Miners’ seven top-eight finishes in the meet. 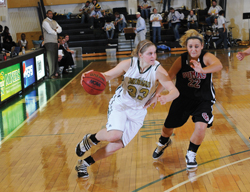 Meanwhile, the Lady Miner basketball team earned a berth in the NCAA Division II Midwest Regional after claiming a share of the Great Lakes Valley Conference’s West Division championship with Drury University. Missouri S&T’s third 20-win season in school history sent it to Houghton, Mich., to face GLVC foe Wisconsin-Parkside in the opening round, where the Lady Miners dropped a 73-55 decision.

Sophomore Hailee Parks, the Lady Miners’ leading scorer on the season with an average of 11.4 points a game, and senior Julie Meyer were named to the All-GLVC third team for their performances during the season.

Track and Field
The S&T track and field teams also sent representatives to the NCAA Championships in Albuquerque, N.M., as junior Terry Robinson competed in the men’s 60-meter hurdles and senior Aubrey Moore in the women’s 400-meter dash. Robinson — one of seven Miners named to the USTFCCCA’s all-Midwest region team — was the GLVC champion in the 55-meter hurdles and had a runner-up finish in the 400-meters. Moore was also an all-region performer and won a conference title in the 400-meters, finishing second in the 200-meter dash.

For the second year in succession, the men’s track team finished second at the conference meet, as senior Bryan Kluge (800-meters) and freshman Adriel Hawkins (triple jump) joined Robinson as conference champions. Freshman Rachel Ederle also earned a conference title on the women’s side leading a 1-2 finish for the Lady Miners in the pole vault. The Lady Miners placed fourth as a team.