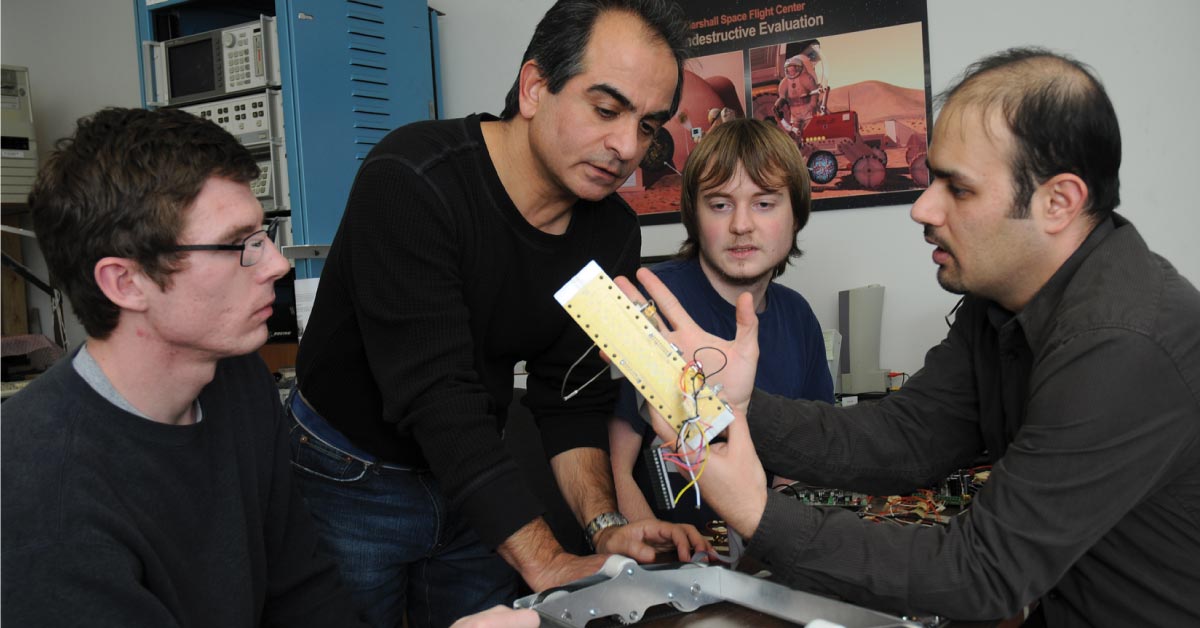 The science used in airport body scanners could soon be used to detect defects in aerospace vehicles or concrete bridges as well as skin cancer, thanks to an S&T research team led by Reza Zoughi, the Schlumberger Distinguished Professor of Electrical Engineering.

Zoughi’s group developed a patented handheld camera that uses millimeter and microwave signals to non-intrusively peek inside materials and structures in real time. His contributions to this field, in part, have earned him the 2011 Joseph F. Keithley Award in Instrumentation and Measurement from the Institute of Electrical and Electronics Engineers (IEEE).

“In the not-so-distant future, the technology may be customized to address many critical inspection needs, including detecting defects in thermal insulating materials that are found in spacecraft heat- insulating foam and tiles, space habitat structures, aircraft radomes and composite-strengthened concrete bridge members,” Zoughi says.

The technology could help detect and monitor a variety of skin conditions in humans, including cancer and burns. It also has the potential to help Homeland Security personnel detect concealed contraband (such as weapons) or reduce the number of passenger pat-downs at airports. Even homeowners could see a direct benefit from the technology as it potentially could be used to detect termite damage.

The compact system can produce synthetically focused images of objects — at different planes in front of the camera — at speeds of up to 30 images per second. A laptop computer then collects the signal and displays the image in real time for review. The entire system, powered by a battery similar to the size used in laptops, can run for several hours.

“Unlike X-rays, microwaves are non-ionizing and may only cause some heating effect,” Zoughi says. “However, the high sensitivity and other characteristics of this camera enables it to operate at a low-power level.”

Currently the camera operates in the transmission mode, which means that objects have to pass between a transmitting source and its collector to be reviewed. The team is working on designing and developing a one-sided version of it, which will make it operate in a similar fashion to a video camera.

“Further down the road, we plan to develop a wide-band camera capable of producing real-time 3-D or holographic images,” Zoughi adds.