On July 30, 1945, shortly after delivering atomic bomb components to the U.S. air base at Tinian, the USS Indianapolis was torpedoed by a Japanese submarine. Of the 1,197 sailors onboard, 317 survived. One survivor was Paul Murphy, ME’50. 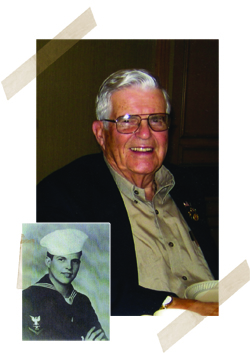 Fact: The sinking of the USS Indianapolis is the Navy’s worst tragedy at sea.
Amount of time in water before rescue: Four days and five nights. (880 men died in the water.)
According to the Discovery Channel: The sinking resulted in the most shark attacks in history.
Murphy: “I am often asked about the sharks. My reply, ‘They don’t like Irishmen.’”
After the war: Murphy attended Missouri S&T on the G.I. Bill.
Fast forward to today: Murphy lives in Colorado and is founder and chair of the USS Indianapolis Survivors’ Organization. He published a book containing survivors’ stories titled Only 317 Survived.