A February article in The New York Times describes Yangchuan (Chad) Xing as “bookish,” shrouded in “anonymity” and “inclined to discuss factual matters rather than tarry on questions of meaning.” Yet Xing’s research into lithium-air battery technology has thrust the quiet associate professor into the limelight. 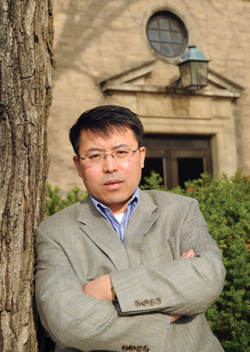 Last year, Xing received one of only two federal awards for lithium-air battery research. The $1.2 million grant over three years comes from a new Department of Energy agency that is modeled after one created by the Eisenhower administration to develop a system that would ensure communications in the event of a nuclear attack. That agency, the Advanced Research Projects Agency (ARPA), sponsored advances that led to the Internet. The new agency — called the Advanced Research Projects Agency for Energy, or ARPA-E — hopes to encourage the same sort of “game-changing” technologies to address energy challenges.

Xing’s group went up against 220 other battery proposals, including plans from Stanford and MIT.

While Xing won’t say much about his research, it has to do with developing a new electrode and new catalyst for lithium-air technology. Why does this matter? Because today’s electric cars can go only about 100 miles on a single charge. But a car powered by a lithium-air battery could theoretically travel 400 or 500 miles.

Xing estimates that if lithium-air technology progresses like lithium-ion, the battery used in electric cars today, it will take 15 to 20 years to go commercial. “But high-risk research like his — which may catapult the technology ahead or slam into a dead end — could change that calendar,” wrote Saqib Rahim in that article about Xing’s work.