Charles A. Wentz Jr.: You can call him Chef Al

Charles A. “Al” Wentz Jr., ChE’57, MS ChE’59, grew up in Edwardsville, Ill. During his career in the oil industry and then as a textbook author, professor and environmentalist for the EPA and OSHA, he lived and worked all over the world, but returned to Edwardsville to retire. Today, Wentz runs a healthcare company that operates a Lebanon, Ill., nursing home. He holds a Ph.D. from Northwestern and an MBA from SIU Edwardsville. In his role as “Chef Al,” Wentz hosts a dozen charitable gourmet dinners and barbecues at his home every year and has published three cookbooks of recipes he perfected during his travels. 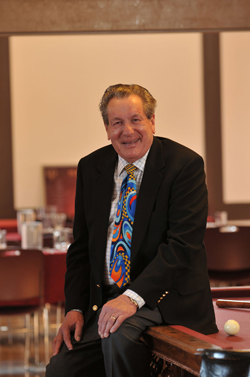 Passions: Education, scholarships, Pi Kappa Alpha and cooking.
Wentz on education: “I decided through high school and college days that I was going to get as much education as I could. Education has always been a major goal for my family. It enhances your career opportunities.”
Wentz on scholarships: “It started with a scholarship to honor several members of a group of guys I went to high school with in Edwardsville. There were 15 of us. We were really close. After that, I worked through a local foundation to establish a scholarship with more of an engineering focus. One thing led to another and I kept establishing more and more scholarships to ‘give back,’ both in Edwardsville and at Missouri S&T. Now I give $40,000 a year to various organizations for scholarships through a number of endowments.”
Wentz on Pi Kappa Alpha: “I was president of the chapter and I took a great deal of pride in it when I was at Rolla, so I had a personal interest in seeing it prosper. When the chapter house burned to the ground in 1999, I got more involved with the chapter. Seeing the house rebuilt from ashes and watching it grow and prosper to the point it is now has been a tremendous source of pride for all the alumni, not just me. Everyone is really proud. Working with the active members, watching them graduate and go into successful careers is a wonderful thing. That’s the best part — seeing something worthwhile develop with the individuals.”
Wentz on cooking: “I’ve enjoyed cooking since I was in grade school. But I decided that chemical engineering was a career thing to do and cooking was a hobby. Having taken numerous chemistry courses at Rolla, I look on the kitchen as a chemical laboratory. When I retired in 2002, I earned a culinary arts certificate from a local college under a famous chef. It helped me understand why things work the way they do in food reparation. I decided to start calling myself Chef Al and it’s caught on pretty well. French and Italian cuisine and slow-smoked barbecue are my favorite things to prepare.”