A bite of ‘The Big Apple’

Did you ever wonder how Chicago got the nickname Windy City? Or why Philadelphia is called the City of Brotherly Love? Did you even know that Providence, R.I., is the Beehive of Industry? 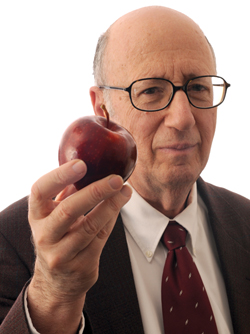 City nicknames like these are fascinating to etymologists like Gerald Cohen. He’s spent two decades researching what is perhaps the most famous city nickname — New York’s Big Apple.

Cohen, professor of foreign languages at Missouri S&T, has co-authored a revised version of his 1991 monograph Origin of New York City’s Nickname ‘The Big Apple.’ Cohen wrote the book, published by Peter Lang, along with independent scholar Barry Popik.

Cohen says there were several stages to the origin of the nickname.
“Apples were important throughout history, but the big red delicious apples developed in Iowa in the 1870s came to be regarded as extra special,” Cohen says. “That led to ‘the big apple’ being applied to things and people who were extra special, or perhaps only thought they were. Then in a 1920 conversation between two African American stable hands in New Orleans, one proudly said that he was going to ‘the big apple’ (meaning the New York City racetracks, which were regarded as the big time in horseracing).”

New York turf writer John J. Fitz Gerald overheard the conversation and a year later began using “the big apple” in his columns, Cohen says, popularizing the term early on, but it was limited to horseracing.

“In the 1970s, a public relations man named Charles Gillett revived the term as part of a publicity campaign for the city,” Cohen says. “And, as they say, the rest is history.”