The way they ate

It was a recipe for disaster.
Walter Lounsbery, AE’78, MS AE’85, lived in his landlord’s basement apartment, a small space that had been carved into four little rooms with a common kitchen and bathroom. Despite his lack of cooking skills and a gas oven that had no pilot light, he survived most of his freshman year. He didn’t gain the dreaded “freshman 15,” but he wasn’t starving either. 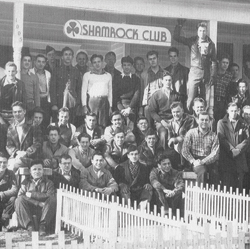 Then it happened.
“I let the gas run too long before lighting the burner,” Lounsbery recalls. “The resulting fireball rolling out of the open oven singed off my eyebrows and woke the other residents in the basement. At that point, joining the Tech-Engine Eating Club was not so much a matter of convenience as saving my residence from certain fire and destruction.”

Eating clubs provided students with nutritious meals at reasonable rates. Harold Bennett, ChE’60, says he joined the Engineers Club as a sophomore after its business manager, Ronald Gillham, ME’56, invited him to join. Dues were about $1 a day.

“It allowed me to get through college without starving to death,” Bennett says. “I had to make all my dimes go a long way, and I certainly enjoyed being in the club.”

Fellow club member Lawrence Gidley, MetE’55, MS MetE’56, says the dues were cheaper than eating in the university’s cafeteria. With more than 100 members, the club could afford to hire two cooks who prepared “typical meals that you would have at home.”

Unlike the Ivy-League eateries that served fanciful delicacies at Harvard or Yale, eating clubs like the Grubstakers, Lucky Strike or Bonanza were founded to provide healthy, home-cooked meals at a minimal cost to Rolla students.

James Berthold, ME’60, says he picked the Prospectors Club in 1956 because “it was the first one to accept” him. With many Korean War veterans on campus, the clubs had more applicants than they could take and conducted interviews for membership.

“We elected our own officers, one of whom was business manager,” says Berthold, who eventually served as club president. “He bought all the food from vendors, and hired and supervised the cooks and dishwashers. When beans showed up on the menu too often, because the business manager got a great bargain, the members would revolt and elect someone else.”

Carl Armstrong, ChE’60, remembers the ‘49ers serving hearty food like chili mac (one of his favorites at the time). He joined as a senior and enjoyed not having to cook.

“I liked the food there,” Armstrong says. “In those days, it probably wasn’t strong on vegetables and salad. But the prices were reasonable.”

In addition to providing good food, the eating clubs offered students an opportunity for fellowship and fun. Art Baebler, ME’55, says that with more than 100 members, the Tech Club was larger than any fraternity on campus.

“We also participated in intramural activities,” Baebler says. “I was club president my senior year, and we won everything in the intramural sports. We had great influence on what was happening on campus at the time because we were well organized.”

Besides friends and recreation, eating clubs also offered plenty of opportunities to share in the St. Pat’s festivities, including taking turns creating “Alice,” a soupy, slimy concoction that knights of St. Patrick were baptized in.

“Tech-Engine had custody of Alice while I was a member,” Lounsbery recalls. “Alice was outside the kitchen, where she received various scraps on a regular basis. We had a lot of fun times.”