The highs and lows of Adventure Clubs

From the depths of the Earth to the wild blue yonder, study-weary S&T students in need of a break find some pretty unusual places to burn off steam. 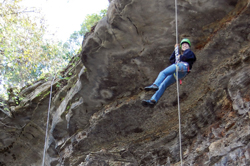 “I like going someplace where you have no contact with the outside world — where it’s quiet with no electronics,” says Laura Sisken, a junior in physics, “Also, I like mud.”

That’s a must for MSM Spelunkers Club members, who spend hours far inside the Ozarks’ hillsides crawling on their bellies through muddy creeks and squeezing through tight spaces, in pitch darkness with just a headlamp for light. Not for the claustrophobic, spelunking is physically and mentally demanding, and dangerous. But the payoff is worth it.

“Caves are like the final frontier,” says club president Tyler Allen, a senior in electrical engineering. “Each is unique, and you always notice something new.”

Begun in the early 1930s, the Spelunkers Club became university-sanctioned in 1949 and is open to anyone interested in the sport, including local residents. About 230 people are on the club’s email list, but only about 20 are regular cavers.

Former club president Eugene Degenhardt, GeoE’67, described the group as a “quite independent, rag-tag, contrary, territorial, protective, maverick caving club.” That same spirit was evident at a recent meeting, with 16 members dispersed throughout a large classroom, barely visible, slouched far down in their seats with an entire row to themselves. Here they swap stories and plan their next adventure.

The sport relies on the group’s ability to work together in the close confines of a cave. A minimum of three people are required for an outing, and safety is the priority. They are also vigilant about decontaminating their gear before and after entering a cave, and not disturbing wildlife or formations.

“The cave ecosystem is very fragile,” says Allen. “We try to keep our numbers to a maximum of 12 people to limit the chances of stepping on creatures you can barely see, or disturbing bats trying to hibernate.”

Andy Free, a Rolla resident and 14-year member, helps the club maintain relationships with area cave owners. “I’ve worked hard to get to know them,” he says. “I make sure our members take care of their caves.”

Members work to restore, survey and map the caves. Mapping is completed by hand, then is computerized and sent to the Missouri Spelunkers Society. “No one wants to do the sketching, because it’s really hard,” says Allen. “But if you do, your name is included on the map.”

Spending hours underground isn’t for everyone. Some students prefer the thrill of wide open spaces. For them, nothing compares to a freefall from 10,000 feet.

For about $200 each, members of Missouri S&T Skydiving Club board a small plane at Rolla National Airport near Vichy, Mo., for a jump that typically lasts 5-10 minutes. They plan one jump per semester.

“Most first-timers tandem-jump with a certified instructor,” says club president Ben Payne, a graduate student in physics. “And most of them just do it just once.”

Payne’s first jump was not a tandem jump, but a solo jump with “instructor-assisted deployment.” He crawled onto the plane’s wing, hung from the bar underneath and let go. Then, from inside the plane, his instructor pulled a pilot chute which deployed Payne’s main chute.

“I actually blacked out for a few seconds my first time,” he says. “I have no memory of it.” But the 43-jump veteran’s awareness did improve with subsequent outings. Payne admits that he spent entirely too much time and money skydiving as an undergraduate at the University of Wisconsin-Madison. “When I came to Rolla I vowed to focus on school,” he says. So for now, instead of jumping, he gets new people involved in the sport.
The club was officially recognized by the university in 2004, but it was inactive when Payne came to S&T in 2007, due to a plane crash the year before. Pilot error was determined to be the cause of the crash, which killed S&T senior Robert Cook and five others. Cook, a certified skydiving instructor, saved the life of an Australian tourist by positioning himself to take the full impact when their plane hit the ground. In 2008, Cook posthumously received the Austrialian Star of Courage Award, one of that nation’s top bravery awards.