In the 1980s, Jason McHaney saw an ad for yearbook photographers in the student newspaper, the Missouri Miner. Though he had his doubts, he decided to go to a meeting to get more information. The offices of the yearbook, the Rollamo, were on the third floor of the Rolla Building at the time. “I will always be glad I made the climb up those stairs,” says McHaney, ChE’91. 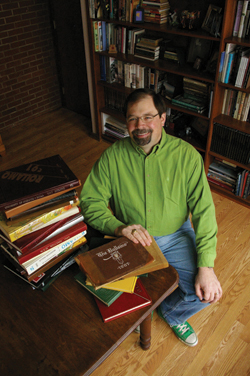 “From my first Alice celebration during St. Pat’s, which I saw through a lens, to the day I found myself sitting on top of cases of ‘my books’ as editor-in-chief, the Rollamo is the window through which I saw campus.”

The darkroom where he developed his photos was located in the basement of the Rolla Building, so that’s where McHaney spent a lot of time during his early years on the Rollamo staff. And that’s where he discovered boxes and boxes full of old yearbooks. “I was always interested in how there was a feel for different decades,” McHaney says. “I also liked seeing how the students looked, and realizing that these people had gone through the same things I was going through. Reading their accounts of campus events made me realize just how similar we really were.”

In October of 1990, when McHaney was the photo editor of the Rollamo, he saw a demonstration of a software called PageMaker. Impressed, he went before Student Council to ask for funds to purchase a new computer that could run the software. “I still remember the day when the computer arrived,” he says. “It was delivered to (history professor and Rollamo advisor) Lance Williams’ office. We loaded it into Dr. Williams’ RX-7 and drove it slowly down the sidewalk toward the Puck and over to Norwood Hall, where the Rollamo offices had been relocated.”

The 1991 Rollamo was the first in the history of the publication to utilize an electronically submitted layout. According to McHaney, the layout was submitted to the publisher on 20 or so floppy disks.

That 1991 edition was created during McHaney’s last year on campus, when he had become editor-in-chief. At the end of the school year, the publication was still unfinished and most of the staff had left town. McHaney spent the summer finishing the book, but he says it was a nice way for him to say goodbye to Rolla following graduation.

McHaney may have said goodbye to his days as a student in Rolla, but he didn’t really leave his Rollamo experiences behind. In fact, he now owns copies of every issue from 1907 to 2007. He started by buying old copies from the 1920s and 1930s that he found on eBay. “It kind of snowballed after that,” says McHaney, who is the process safety management coordinator for Arkema Inc. in Calvert City, Ky. “The archives and alumni offices at Missouri S&T helped me out when I visited campus. The biggest problem has been moving the collection to three houses in two years.”

One of McHaney’s favorite books is the one from 1944 because it was probably the smallest, due to World War II. But, for him, the holy grail was always the very first Rollamo, published in 1907. Not too long ago, he contacted the S&T library, hoping to get some leads on where to find a copy. “The staff member I talked to asked me which book I was looking for,” McHaney says. “I told her which one; she took my address and said she would see what she could do. The 1907 issue arrived at my door two days later.”