One campus. One community. One world.

Lions, dragons and camels paraded through downtown Rolla last fall, illustrating that everyone loves a parade, regardless of their native country. 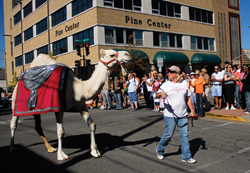 The “Celebration of Nations,” was designed to bring community residents and students together to share their home countries’ culture and traditions and to celebrate the area’s rich diversity. It was a big success.

“Several student organizations worked closely together to make this event happen,” says Harsheel Shah, a graduate student in aerospace engineering from India. “They cheered for each other’s countries — it definitely increased harmony between the groups.”

Highly visible banners were placed throughout Rolla with the tagline “One Campus. One Community. One World.” The banners and a beautiful autumn day helped generate a good crowd for the parade that kicked off the Oct. 9 celebration, with colorful flags representing 66 countries.

“The people lined along the streets for the parade were great,” says Daoru Han, a graduate student in aerospace engineering from China. “Our flag, dragon and lion costumes brought cheers from the crowd.”

The parade also included marching bands, camels, an African musical group and an Indian Palki, a traditional transport for brides on their wedding day. Shah helped decorate the Palki.

The festival following the parade, which included international displays, arts, crafts and food, also drew a large crowd. An “International Idol” talent competition was held that afternoon with a variety of acts, both international and local.

The next day, as Han was eating lunch at a local restaurant, “an old guy came up to our table and said he recognized me from the parade. He really enjoyed it.”

Plans are already under way for the next Celebration of Nations set for Sept. 24.