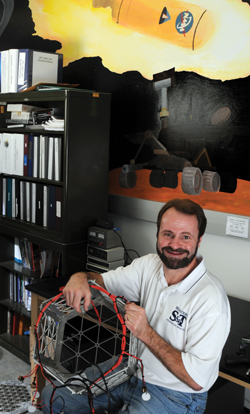 Least favorite part of advising: NASA won’t let advisors fly in the near-weightlessness of its “Weightless Wonder” aircraft (with the Miners in Space Team). Only students. Bummer.
M-SAT: The satellite team is at the core of Pernicka’s research (spacecraft design and orbital mechanics), so advising M-SAT is a natural fit. The team can compete every two years, but competition is by invitation only. The current competition for Missouri S&T began in January. The team will be testing three satellites — two cooperative and one not in contact. The project will help satellites sync orbits with things like space debris or adversarial spacecraft.
Miners in Space: Pernicka got a random email offer from NASA advertising a research program on the “Vomit Comet,” a fixed-wing aircraft that provides near-weightlessness. He sent it on to his students and they jumped at the chance. They first flew an experiment in 2003, and have flown a total of six times now. Proposals for the next program were submitted in January.
Formula SAE: S&T’s Formula SAE Team, typically ranked in the top 20 out of more than 400 teams internationally, plans to race in California in June and compete in the Formula Student Germany race in August. Students are working now to raise the funds required to ship a car and a team of students overseas. Pernicka, whose father was a part-time mechanic, grew up fixing cars. “In college, if my car broke, I either fixed it myself or walked.” He sees himself as the team’s cheerleader. “I can still take my car apart and put it back together, but I can’t design a racecar. The students on the team teach themselves and really learn a lot from alumni mentors.”
Current ride: A 1971 Corvette. Called a “survivor,” the car has most of its original parts. Pernicka performs all of the maintenance himself.