Even Groucho Marx, the comedian who quipped, “I don’t care to belong to any club that will accept me as a member” could have found something to do at Missouri S&T, where students are welcome to join any of more than 200 different student organizations. Even during the Marx Brothers’ movie-making heyday — in the ’30s and ’40s — Groucho and his brothers easily would have found a student organization on the Rolla campus where they could fit in. 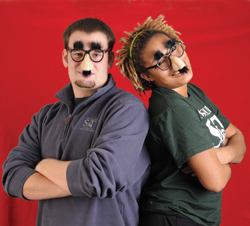 S&T students have been forming social groups since the campus’s earliest days. According to the campus history book by Lawrence O. Christensen and Jack Ridley, Missouri S&T Curators’ Teaching Professors emeritus of history, Gustavus A. Duncan (class of 1874) “organized what he called a club” in the spring of 1872. Duncan and four other students “rented three rooms over a hardware store, hired a cook, and ‘went to housekeeping,’” creating the precursor to the campus’s popular eating clubs of later years.

By the early 1930s — as the Marx Brothers were hitting it big with their parody of college life, the movie Horse Feathers — the Rolla campus teemed with student organizations. They included literary societies, fraternities, eating clubs, a student newspaper, a yearbook, baseball and football teams, a chapter of the Young Men’s Christian Association, the International Club, the St. Pat’s Board, the Mining Club, the Trowel Club and a group called Quo Vadis, which involved train-hopping and “took as its symbol the hobo.” There was even a theatrical troupe — the MSM Players — for Marx Brothers wannabes.

While you won’t find any train-hopping clubs on campus today, opportunities for S&T students to band together are more diverse than ever. Regardless of which groups a student joins and why, what’s important is that joining matters — not only during the college years but also as students prepare for the future.

Today’s savvy students know that a list of activities looks impressive on a resume, a fact reinforced by S&T’s career opportunities and employer relations staff. But the benefits of joining extend beyond that piece of paper. For Helene Hardy Pierce, EMgt’83, getting involved in student organizations helped sharpen her time-management and leadership skills — essentials for success in the classroom as well as in life, she says.

“It comes down to balancing, scheduling and managing your time,” says Pierce, now vice president of technical services, code and industry relations for GAF Materials Corp. based in Wayne, N.J.

Gary Hines, CE’95, agrees. “I had to balance the organization’s needs with my academic and work needs,” says Hines, who held two leadership positions in student groups his senior year. He was president of Chi Epsilon, the civil engineering honor society, and vice president of the American Society of Civil Engineers student chapter, which had about 250 members in those days. Holding these positions “taught me how to prioritize and organize,” he says.

Pierce adds that her involvement in extracurricular activities “also exposed me to a much broader group of students much more rapidly than I would have through my classroom experience,” another attribute that comes in handy in the workplace. The experience was similar for Hines, who is now vice president of operations for the Southern Gas Association in Dallas. “I learned how to deal with different personalities and manage different needs within the organization,” he says.

In addition to ASCE and Chi Epsilon, Hines was involved with the Steel Bridge Team and the Trap and Skeet Club. Pierce, meanwhile, served on Student Council and was a member of Chi Omega sorority, Sigma Phi Epsilon’s Golden Hearts and the service organization Intercollegiate Knights. She also played and coached intramural volleyball for the McAnerney Hall women’s team.

In addition to preparing students for the world of work, extracurricular activities help students “learn how to play nice on the playground of life,” Pierce says. “If you don’t learn how to get along, then you’re just making your life difficult.” In intramurals, for example, “you bring together different people with different skills but they all want to participate.” Being able to work with people from different backgrounds and with different skills is essential to career and life success, she says.

Gregory Skannal, GeoE’85, agrees. Growing up in a predominantly African American neighborhood in Kansas City, Mo., “I didn’t have that much interaction with Caucasian students,” he says. And even though he joined an African American fraternity, Alpha Phi Alpha, Skannal’s involvement in several other student groups allowed him to interact with many students from different backgrounds. He was the only African American majoring in geological engineering at that time, and his participation in the Association of Engineering Geologists allowed him to connect with white and international students, both undergraduate and graduate. “It also broadened my understanding of what I could do with a geological engineering degree,” he says.

While serving as president of Gamma Alpha Delta, a service organization that worked with all campus Greek-letter organizations during Skannal’s years at Rolla, he became friends with a student whose fraternity — Kappa Alpha — has roots in the Confederacy. “That gentleman and I became good friends during that time,” says Skannal, who is now manager of health, safety, security and the environment for Hydrogen Energy California, a joint venture company of BP Alternative Energy and Rio Tinto in Long Beach, Calif.

“That exposure opened my eyes to a new world,” he says.

Like Pierce, Skannal was a member of Student Council. He also served on the Interfraternity Council, the Association of Black Students, the National Society of Black Engineers and the Intramural Managers Association.

As Hines, Pierce and Skannal all agree, involvement in student groups proves valuable on many levels. “In Rolla, it’s very easy to not get involved — to just stay in your room and study,” says Pierce. But getting out of that room and joining an organization will not only introduce students to a new world, as Skannal puts it, but also better prepare them for that world.