Through a new effort called the Technology Acceleration Program (TAP), Missouri S&T is providing seed money for commercially viable research projects in an attempt to move technology out of the laboratory and into the marketplace. It’s doing so by reinvesting the university’s earnings from patents. 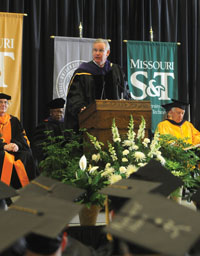 “So many great ideas end up languishing in the laboratory” due to a lack of “proof of concept” funding, says Keith Strassner, Chem’79, director of technology transfer and economic development. TAP is designed to “bridge the commercialization gap” and allow researchers to further refine promising ideas.

“We’re focusing on those ideas that we are pursuing patent protection for, but for which we don’t yet have a licensee,” he says.

For the first year of the new program, Missouri S&T earmarked $75,000 in royalty income and solicited proposals for funding of three projects of up to $25,000 each. “We wanted to know from the researchers, ‘What are you going to do to make the project more marketable?’”

“These are projects where the researchers need to develop more data to support their idea, build a prototype or otherwise push their technology further toward commercialization,” Strassner says.

One of the TAP-funded projects will help a researcher develop a prototype for an energy-efficient water heating system, while another will help a researcher gather data on a new specialty glass that could be used to re-grow bone and soft tissue. The third project involves the development of computerized “smart” sensor technology to monitor bridges for cracks or other defects before they grow into larger problems.

Missouri S&T’s licensing income last year was around $400,000, and about 22 percent of that — or roughly $89,000 — will go to the technology transfer program to continue the TAP effort.

While other universities provide seed funding for similar commercialization efforts, Strassner says Missouri S&T is unique in its approach of reinvesting royalty income.

“We think it’s the right thing to do — to take the money from one invention and invest it in the next one,” he says.