In 1997, forward-thinking students decided it was time for a new student center, even though they would graduate long before it was completed. The students approved a special student fee, resulting in $12.5 million to help fund the facility. Using those fees, along with millions in private funding — including a $5 million lead gift from Gary Havener, Math’62 — university officials built the Havener Student Center, which opened in 2005. 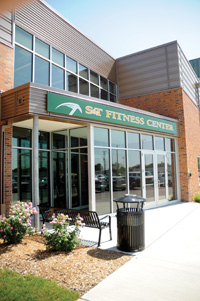 Entrance to the Fitness Center. (Photo by B.A. Rupert)

That year the S&T Student Council voted to match private support for a new fitness center by devoting an approved student fee to the facility. The student commitment allowed the university to finance an additional $1.5 million to complete phase I of the effort last fall.

Both contributions to the S&T campus have significantly improved students’ college experience.

“The Havener Center is a good tie between the university and the community. It makes a good impression on everyone.”

“The Havener Center is a good tie between the university and the community,” says Selin Acar, a junior from Rolla in chemistry pre-med and Student Council recorder. “It makes a good impression on everyone.”

The facility houses 14 meeting rooms for groups as small as 10 and as large as 500. There is also a food court, bank, bookstore, bagel and coffee shop, and game room, as well as lots of comfortable seating for students and visitors to relax or study. It is the home of many student organizations and provides wireless access.

“The Havener Center has made things much easier on students,” says Student Body President Michael Schwartz, a senior in civil engineering from Foley, Mo. “It is nice to have meeting rooms available throughout Havener for different organizations to host different meetings and events. It eliminates the hassle of running all over campus.”

Lacey Ahlemeyer, a junior in economics from St. Charles, Mo., and president of the S&T chapter of the Associated Students of the University of Missouri (ASUM), says the facility is ideal for the political events her grouphosts. “The meeting rooms already have projectors — we just have to plug in our computer.”

In the student life department on the second floor, student organizations have offices with computers and couches, items they didn’t have in the old University Center. The groups share a common area and a conference room.

“The atmosphere in student life has changed significantly since we moved into the Havener Center,” says Kathy Allison, administrative assistant, who has worked in the department since 1991. “The groups used to be isolated from each other — we all had to learn to work together in this new space. Relationships have improved a lot.”

Student members have access to their offices via a key card. “They are here at all hours,” continues Allison. “It’s a safe and comfortable place for them to be.”

“I essentially live in Havener,” says Student Union Board President Quentin Ortega (pictured above right), a senior in business and management information systems from Gainesville, Mo. “It’s nice for all the organizations to be together in the same area.”

S&T Fitness Center
Open for nearly a year now, the air-conditioned S&T Fitness Center offers the latest equipment to students at no charge. The facility includes top-level cardio machines (many with touch screens and TV); free weights like dumbbells, Olympic weight bars, plates and racks; weight machines; and a core area with exercise balls and medicine balls. The students matched $1.5 million in private gifts, including a $1 million donation from Anheuser-Busch and $250,000 from Roger, ME’65, and Sandy Dorf.

“The old facilities were really lacking, especially compared to many other colleges I’ve visited,” says Ortega.

“Everyone I’ve talked to speaks highly of it now.”

“The bikes with the games are awesome,” says Ahlemeyer. She says many of her friends compete with each other by posting their latest results on their doors.

“I love the fitness center,” she says. “It’s a definite asset to the university.”