Without the help of scholarships, Danny Ryan, ME’10, and Lance Weinmann, CE’10, ArchE’10, couldn’t have made it through college. To them, the alumni who founded their scholarships are heroes, and today, Ryan and Weinmann are doing their part to be heroes to the next generation of Missouri S&T students. 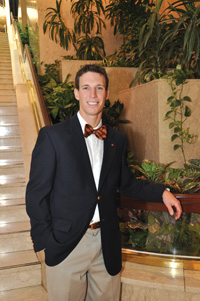 The pair met through their fraternity, Pi Kappa Alpha, and became fast friends. Last spring, they joined the Order of the Golden Shillelagh (OGS) donor society together, an unusual step for undergraduate students.

“We both had an outstanding experience here at S&T and we wanted to ensure others had the same opportunity to enjoy that same great experience, no matter what their situation in life might be,” Ryan told OGS members during the 2010 induction ceremony. He and Weinmann spoke to the group about their decision to join OGS at such a young age. 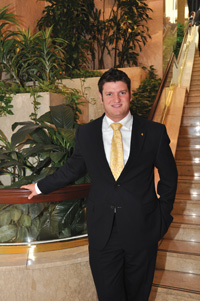 “Despite not knowing how financially sound … our futures were going to be, we felt that it was better to make the commitment for the overall greater good,” Ryan said.

Pi Kappa Alpha also introduced Ryan and Weinmann to the men who founded their scholarships — David Grimm, MetE’50, and the late Richard “Dick” Bauer, ChE’52. Pikes themselves, Grimm and Bauer were active alumni in the chapter and liked to stay in touch with the students who benefited from their scholarships. That relationship was an important one for both Ryan and Weinmann. They say they developed immense respect for Grimm and Bauer, but they also noticed similarities between their relationships.

“We learned of the incredible determination and competitive natures of Dave and Dick and, much like ourselves, of their constant drive to best the other in anything and everything.”

“We learned of the incredible determination and competitive natures of Dave and Dick and, much like ourselves, of their constant drive to best the other in anything and everything,” Ryan said.

“Whether it be their successes in industry, their devotion to the university, their love for the fraternity or even their simple bets on what the Cardinals would be doing at bat, these two men were constantly bettering each other and everyone around them,” Weinmann said. “By getting to know them, we were able to realize they were our heroes and that, since they were real people, we could become just like them.

“It was because of this fact that we decided to join OGS. We want to be the heroes and role models for those who come after us,” Weinmann added.

These two men were constantly bettering each other and everyone around them. By getting to know them, we were able to realize they were our heroes and that, since they were real people, we could become just like them.

“I chose to commit my gift to the Grimm scholarship simply because I received it,” Ryan says. “I hope to set up my own scholarship eventually, but until that time, I felt that this was a very comparable set of criteria for students to receive support.”

Ryan and Weinmann have both pledged gifts to their respective scholarship. It’s their way of paying it forward to the next generation of Miners.

“We want to be the heroes like Dick Bauer and Dave Grimm who built such good friendships that they can compete at everything, yet still think the world of one another, no matter the outcome,” Ryan said.