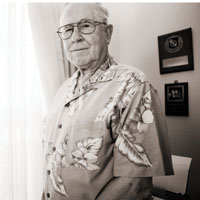 Education: ME’49, master of science degree in electrical engineering from the University of Colorado in 1963.

True story: Carpenter was 16 when he entered college; 20 when he earned his first degree.

Rolla memories: “A fraternity put a car on the roof of the power plant building once.”

What he did after the Air Force: Carpenter joined the faculty of California State University Long Beach. He co-authored a textbook on solid-state circuit design that is currently in its fifth edition.

Where he is now: Cypress, Texas.

Returning to Rolla: “I went back this summer. Norwood Hall stayed the same, and the old Rolla Building. But the place where I used to live is a parking lot.”