Winging it over Kitty Hawk

“We ran up and down the dunes like crazy people, trying to figure it out,” says John Harris, GeoE’70, of his first hang gliding attempts in 1973.

For his maiden flight, Harris picked what he thought was the ideal location — the sand dunes of Jockey’s Ridge State Park near Nags Head, N.C., about 5 miles south of Kitty Hawk, where the Wright brothers made their historic flight. 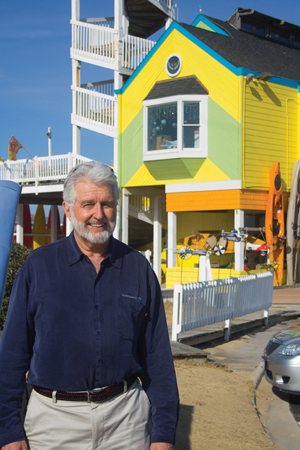 “The students’ excitement and the expressions on their faces are priceless … They may be only 5-10 feet above the ground, on the dunes, but they’re flying.”
— John Harris

His reviews of the 8 mm film showing take-off and landing techniques proved fruitful: One flight and Harris was hooked. The hydrographer who had spent his days surveying and mapping the ocean floor decided to give up his day job to pursue a career in hang gliding.

Coworkers and family members thought he was crazy, but Harris was unfazed. “The concept was so exciting,” he says. “I thought this was the right time to try it.” He felt secure that, being a recent grad, he could easily find another job if the venture failed.

Fortunately, he never had to test his theory.

“The students’ excitement and the expressions on their faces are priceless,” he says. “Their gratitude is tremendously rewarding, especially for the short period of time it takes.” Students can fly solo within an hour. “They may be only 5-10 feet above the ground, on the dunes, but they’re flying.”

Harris knew Kitty Hawk Kites would do well, but he miscalculated which area would be most successful. “Hang gliding was such a great experience for me; I thought so many people would want to do it,” he says. “I expected to sell lots of equipment, but found only a small percentage of the population do it as a lifetime sport.” The company’s most lucrative area turned out to be its retail sales of kites and T-shirts.

In addition to the 17 stores, the company has expanded its outdoor recreation activities to include kiteboarding, parasailing and kayak eco-tours.

In the company’s early days, a visitor stopped by and introduced himself. Harris was stunned to discover the man was Francis Rogallo, who, along with his wife Gertrude, invented the Rogallo wing, a self-inflating flexible wing — the precursor to the modern hang glider, paraglider and kiteboarding kites. A former NASA scientist, Rogallo had retired to the area, and the pair became close friends.

Rogallo was 62 when he first learned to hang glide, and took his last flight when he was 80. He died last year at age 97. “Francis was a gentleman who was incredibly generous with his time,” says Harris. “He had an amazing mind for finding simple solutions to complex problems.”

Harris credits the skills he learned at Missouri S&T with helping him muster the discipline needed to run his business, and to analyze and solve problems he encounters. He says the words of biologist Thomas H. Huxley sum up his time in Rolla best: “Perhaps the most valuable result of all education is the ability to make yourself do the thing you have to do, when it ought to be done, whether you like it or not; it is the first lesson that ought to be learned; and however early a man’s training begins, it is probably the last lesson that he learns thoroughly.”

He’s pulling back some now after being “hands on” for years. He still hang glides, though, just not as often. Or as high. “These days,” he says, “I usually stay on the dunes at Jockey’s Ridge.”