In the fall of 1986, Joe Anselmo was performing a routine maintenance sweep of the sewers in the North St. Louis County city of Normandy, Mo., for the Metropolitan St. Louis Sewer District. Anselmo was inspecting and cleaning a sanitary manhole near Bermuda Road, removing debris from a basket that collects waste, when he found a ring.

Anselmo put the ring in his pocket and continued his work.

“Oftentimes, sewer workers find interesting items both in storm and sanitary collection sewers,” Anselmo says. “Rings slip off fingers and fall into kitchen or bathroom sinks or toilet bowls. They flow through the system, ultimately to a treatment facility.” 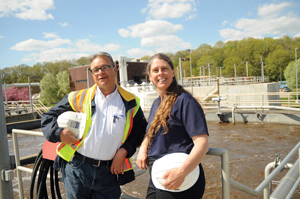 Later, while cleaning the ring, he tried it on.

“I realized the significance and honor associated with a class ring,” Anselmo says. “The owner must have been devastated to lose such a priceless object.”

The more he thought about that class ring, the more he was reminded of his parents’ wish that at least one of their three children would go to college. Nearly 20 years later, that ring inspired Anselmo to enroll in Concordia University, where he earned a degree in liberal arts with a minor in human resources in 2006.

He is the first college graduate in his family.

When Anselmo’s proud parents bought him his own college class ring, he remembered the ring he had found two decades earlier and began his search for its owner.

Determined to find the ring’s owner, Rumpsa tried contacting the company that manufactured the ring, but found that the company had been sold years ago. She then contacted Renee Stone, the accountant in the Miner Alumni Association, hoping that the initials “JAS” and the year 1976 would be enough information to go on. Stone narrowed it down to three alumni and called each to inquire about a missing class ring.

“I told him who I was and asked him to describe the ring,” Rumpsa says. “I actually already figured he was probably the owner, but unintentionally tortured him for a few minutes during the description process.”

The two made plans to meet in Carthage, Mo., a few days later. Schelin would travel to the town near his hometown to meet Rumpsa, who would be traveling through on her way to a horse show. Rumpsa photographed Anselmo holding the ring so Schelin could see the man who found it.

On Friday, Aug. 21, the day before his scheduled meeting with Rumpsa, Schelin had a stroke on a Kansas golf course. He died two days later at the age of 57.

“Andy was so looking forward to meeting Ms. Rumpsa and getting his ring back,” says Jennie Schelin, Schelin’s mom. “It meant so much to him.”

Although Schelin never saw it again, his class ring made it safely home. In October, Rumpsa met Jennie Schelin and her daughter, Ingrid, at the Flying J truck stop in Carthage, Mo., to deliver the ring. Jennie keeps it at the Schelin family farm, a Missouri Century Farm in Verona, Mo. The farm has been in her husband’s family since 1874. 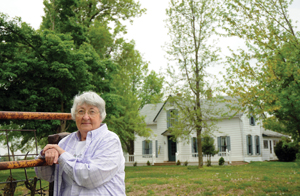 Rumpsa returned the ring to Jennie Schelin, mother of the late John Andrew “Andy” Schelin, MetE’76, last fall. Jennie lives on a Missouri Century Farm that has been in the Schelin family since 1874.

Schelin’s dad, Albert Schelin, began writing the history of the homestead. Since his death, Jennie updates the story frequently to add family milestones. Milestones like the story of Andy’s ring — and the people who helped return it.

For Anselmo, the story is bittersweet. In November, Jennie Schelin sent him a letter of thanks for returning her son’s ring.

“The letter shared some details of Andy’s life,” Anselmo says. “Its message was full of a mother’s love. It reminded me of the love my mother always offered, the kind of love only a mom can provide.”

Although he and Mrs. Schelin have never met in person, there is a bond between the two.

We have built a certain connection through the ring,” Anselmo says. “A circle of life and friendship has been formed.”