For David Deatherage, the past is always present

David Deatherage, EMgt’92, is a professional shopper. He goes to estate sales, auctions and antique shows, always on the lookout for vintage furniture. It was a passion that started back in Rolla after he rented an apartment in an old house that had been divided. The shag carpet and window shades were turquoise. He says the interior of the place looked like it was out of House and Garden in 1952. 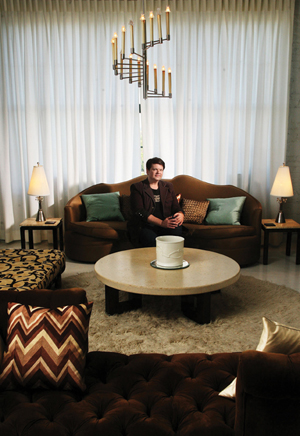 “In my 20s, I think I lived my life as an anachronism,” Deatherage says. “I had vintage everything. I would wear a vintage Salvador Dali tie and a sharkskin suit to go to the grocery store.”

Deatherage started buying 1940s and 1950s items for his apartment in Rolla. After graduating, he started collecting French Art Deco furniture and then became fascinated by Machine Age/Streamline American design from the 1930s. Today, he’s probably most associated with buying and selling glamorous Hollywood Moderne furniture from the 1940s. The celebrity clients he’s sold pieces to include Courtney Cox, Kate Spade, Jillian Michaels and Annie Leibovitz.

Deatherage’s business is called Century Design Ltd. He is based in St. Louis, where he has a spacious loft. “When I put the loft together, I had the idea of it being like a 1940s movie set,” he says. “I threw out the well-traveled concept that a loft should reflect its industrial past. I wanted the space to be more formal and elegant. In the 1930s and 1940s, movie sets were designed to have an element of fantasy and luxury that was a form of escapism from the Great Depression and World War II.”

Among the pieces in his loft are a custom Dorothy Draper cabinet originally designed for the Fairmont Hotel in San Francisco in the 1940s, a Lucite Grosfeld House chair from 1939 and a pair of Tommi Parzinger sconces. Some of these items aren’t for sale, but almost everything else is. Deatherage has a warehouse space full of vintage furniture that’s awaiting the right buyer. He says one of his most memorable finds was a pink lacquer Tommi Parzinger sideboard that had porcelain nail heads. It was purchased in New York and is currently in Malibu, Calif.

For a while, Deatherage was involved with a public gallery called Circa in the Central West End of St. Louis, but most of his business is done online through clients in other cities. “My head in many ways is in New York,” he says. “Most of my clients are there.”

Life in the art world is a long way from Missouri S&T, where Deatherage finished his engineering degree because, he says, he excelled at math and didn’t know what else to do. He did manage to take an art history class during one of his last semesters, though.

“I was more interested in painting when I graduated than getting a job,” he confesses. “But I think my degree was an exercise in discipline. I do think my studies have benefited me in the process of dissecting problems in all aspects of life.”

These days, Deatherage is less likely to break out the sharkskin suit. While gaining experience and success as a dealer of vintage modern furnishings, his tastes became more refined. “As I get older,” he says, “I hope others don’t describe me as ‘Retro.’ I appreciate the design, the quality and the history of vintage furnishing. I take the best of the past with me, but I am more interested in living in the present.”