Once a year, students from around the world get together to test their knowledge of the oil and gas industry in the Society of Petroleum Engineers’ PetroBowl. Missouri S&T’s student chapter of SPE recently placed second in their first-ever competition, which was held in New Orleans. 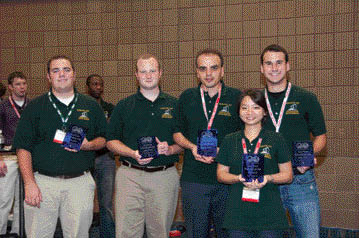 The PetroBowl is a fast-paced quiz competition where competing teams are challenged to answer both technical and non-technical questions associated with the oil and gas industry. The University of Texas came in first, with Missouri S&T close behind.

“We answered most of the technical questions,” says Saeed Salehi, a graduate student in petroleum engineering. “We were left behind over non-technical and historical questions.”

The contest is organized by the SPE Gulf Coast Section Young Professionals Board. This was the largest PetroBowl ever with 16 competing teams, including four international teams.