Nuclear energy: critical for the country

Since 1979, the year of the Three Mile Island scare in Pennsylvania, no new construction permits for commercial nuclear reactors have been awarded in the United States. 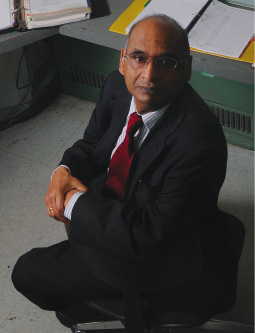 “This is the only industry in the U.S. where the only commercial accident that happened was 30 years ago — and nobody died,” says Arvind Kumar, chair of nuclear engineering at Missouri S&T. But public reaction to Three Mile Island was strong, and it was intensified by The China Syndrome, a film about a nuclear accident that had been released just 12 days earlier. The event had long-term ramifications, despite the fact that no one died and radiation leaks were not deemed sufficient to cause cancer.

“This is the only industry in the U.S. where the only commercial accident that happened was 30 years ago — and nobody died.”

Of course, many people did die as a result of the meltdown of a Soviet reactor in 1986. The accident at the Chernobyl Nuclear Power Plant is considered the worst of its kind. But Kumar says there are no graphite-moderated, water-cooled reactors like Chernobyl in the U.S.

Overblown fears about nuclear energy appear to be subsiding as people look at its huge potential as a clean source of power. Kumar says France committed to foreign oil independence in the 1970s. Now, more than 75 percent of the electricity in France is generated by nuclear power. The U.S. currently generates 20 percent of its electricity from nuclear energy.

Missouri has three reactors. In addition to a power-generating facility in Fulton, both MU and Missouri S&T have reactors that are used for teaching and research. Missouri S&T is one of only 22 universities in the nation to offer bachelor’s degrees in nuclear engineering — consistently ranking in the top five programs in the nation in the number of undergraduate degrees awarded. Thirty institutions in the country, including S&T, offer doctoral degrees in the discipline.

There is a big demand for nuclear engineers. The average starting salary for Missouri S&T nuclear engineering graduates is $60,000. Most work for private utilities or the federal government. But nuclear engineers are also driving innovations in medicine. In addition to making standard X-rays and radiation treatments possible, nuclear technology is used to detect and treat various kinds of cancer.

To generate interest in nuclear engineering, Missouri S&T hosts a summer camp for about 30 high school students each year. They learn how to detect radiation and identify radio isotopes. They also learn the concept of half life and how to operate a reactor.

“Everything is supervised and safe,” Kumar says. “Our reactor is cooled by a 30-foot-deep pool of water. You can safely stand right there next to it.”