Natural gas: Between rock and a tight space

The United States has loads of natural gas below its surfaces, but extracting it has been difficult because much of the gas is trapped in “tight” formations. The key, as it turns out, is to approach the problem at an angle.

In conventional reservoirs, interconnected pores allow gas to flow into a vertical well.

“Oil and gas are found in the empty space within rock,” explains Shari Dunn-Norman, professor of petroleum engineering at Missouri S&T. “The empty spaces are normally pores in the rock but they can also be found in natural fractures. In conventional reservoirs, interconnected pores allow gas to flow into a vertical well.”

The conventional way to extract petroleum from reservoir rock involves drilling straight down. Water and sand are injected to create an engineered fracture that enhances the flow of oil or gas. In vertical wells, a single hydraulic fracture is created to coax the hydrocarbons to flow. 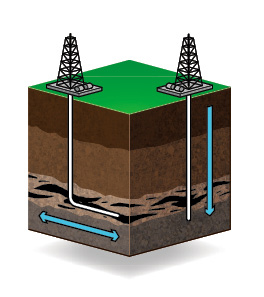 But according to Dunn-Norman, the U.S. has large gas reserves trapped in “tight rock” called shales, which have extremely low porosity and permeability. Shale deposits are located throughout the country, from Appalachia to the Rocky Mountains.

Getting at those shale gas reserves was difficult and drilling wasn’t profitable — until a new technology was realized. Now it’s possible to drill down and then drill horizontally to contact more of the reservoir. Multiple hydraulic fracture stimulations are subsequently performed along the horizontal well. This method has unlocked the “tight gas” potential within the United States.

According to the Energy Information Administration, the U.S. has 33 trillion cubic feet of proven shale gas reserves. “But that’s only the Lower 48,” says Dunn-Norman. “Who knows what’s in Alaska? Also, this only accounts for reserves that we know are certain. It doesn’t include prospective or undrilled acreage. So the reserves from shale gas are definitely much greater.”