Chancellor John F. Carney III received the Chief Executive Leader of the Year Award in January from the Council for the Advancement and Support of Education’s District VI. He was recognized for leading the university through its name change and academic reorganization, emphasizing energy and environmental research, and bolstering alumni support through the campus’s $200 million Advancing Excellence Campaign. 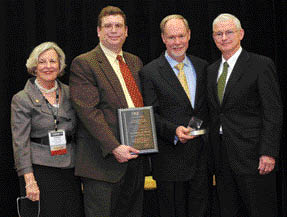 In a letter of support for Carney’s nomination, University of Missouri System President Gary D. Forsee, CE’72, said Carney successfully implemented both the name change and the reorganization because he “managed to create buy-in while quickly, carefully and methodically sharing information with all the key players — from students, faculty, staff and alumni to state legislators and administrators at the University of Missouri System and Rolla’s sister campuses.

“In every instance, he presented a solid rationale for both transformational processes, based on fact, and communicated his vision and reasoning using a variety of approaches that kept the preferences of the various audiences in the forefront,” Forsee wrote.