Working with atomic-scale particles known as quantum dots, Missouri S&T biologist Yue-Wern Huang hopes to develop a new and better way to deliver and monitor proteins, medicine, DNA and other molecules at the cellular level. The approach would work much like a virus, but would deliver healing instead of sickness. 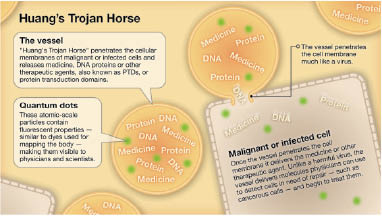 The work involves the construction of nanoscale vessels of cell-penetrating proteins to transport the quantum dots, along with proteins, medicine or DNA, into the cell and release them. Huang, an associate professor of biological sciences, likens the process to the ancient story of the Trojan Horse, which according to Greek mythology was used to deliver Odysseus and his army into the enemy city of Troy. But in this instance, the vessel is a “protein transduction domain,” the cargo consists of biomolecules or other therapeutic agents, and the walled city is the cell.

Essentially, the nontoxic protein transduction domain, or PTD, is derived from a virus that can penetrate the cellular membrane. But instead of spreading sickness, it would spread medicine or DNA.

Working with Huang on the effort are Jeffrey Winiarz, an assistant professor of chemistry, who is creating the quantum dots, and Katie Shannon, assistant professor of biological sciences, who is providing bio-imaging expertise. The research is funded through a $225,000 grant from the National Institutes of Health under the American Recovery and Reinvestment Act.