True success in life requires more than mere talent and intelligence. It also takes passion and hard work. That was the message Roger Dorf, ME’65, shared with Missouri S&T’s newest graduates during the campus’s Dec. 19 commencement ceremonies. 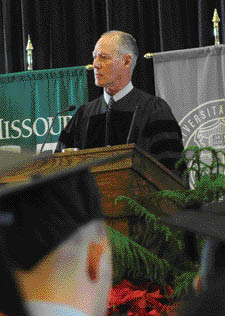 Referencing Malcolm Gladwell’s recent book, Outliers, Dorf told the new grads that successful people are driven by a passion for their life’s work, and “they always worked harder and/or practiced more than the rest.

“So I would summarize this book, in my simple terms, by saying A.) It’s better to be lucky than good, B.) Timing is everything, and C.) The only thing we as individuals control is the passion with which we approach our work and how hard we work. Both of these, I contend, will be greatly influenced by the work you choose to do.”

Dorf knows a bit about success. The former vice president and general manager for Cisco Systems has held executive positions for many corporations, including IBM, Nortel and AT&T. He’s also involved with campus as a member of the S&T Academy of Mechanical and Aerospace Engineers and the Board of Trustees, where he serves as vice president.