When I enrolled in college there were certain things I expected and certain things I conceded. I expected to have to work hard to still be enrolled when Greek Week and St. Pat’s came around, and that if I wasn’t successful at this balancing act I would be reduced to something less than I aspired to be. 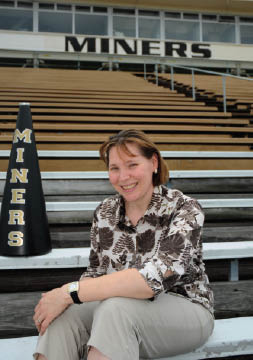 As one of those rare liberal arts majors at Missouri S&T, I either had to take three semesters of one language or two semesters of two languages to graduate. I started with Spanish and completed two semesters. One more semester and I was done. But, I decided to walk off the path and learn a language that not everyone was learning, and I went for Russian. After one week of class with Dr. Ivliyeva I was hooked. Not only did I complete the two semesters required for graduation, but I went for a third semester to take her Russian Civilization course.

To be honest, I really didn’t like attending most classes outside of my history and political science classes. But Dr. Ivliyeva had a way of making me want to learn the material. Her class was engaging and, believe it or not, fun. But I never said class was easy. My Russian courses were honestly some of the hardest I took at Missouri S&T. But Dr. Ivliyeva taught me that even though something is difficult, it can still be enjoyable and we definitely should not shy away from it. She taught me to welcome – no, to invite – daily challenges with an optimistic attitude. So when I was not performing so well in her class, I didn’t drop out or give up, I pushed myself harder because even though it was hard, she inspired me to want to come to class and soak up every bit of information. I carry that life lesson with me every day.

In 2008, I competed in the Beijing Olympics. And honestly, if it were not for the extra caring attention that Dr. Ivliyeva gave me, I’m not sure I would have been successful enough at track in college to become an Olympian. My first two jumps at the Olympics were pretty bad, but instead of shying away or dropping out of competition I pushed myself harder, just like Dr. Ivliyeva taught me, and finished 15th out of 52. And thanks to Dr. Ivliyeva, I’m good friends and occasional pen pals with members of the Olympics teams from Russia and Belarus.

Tyrone Smith, Hist’07, lives in Houston, where he is training for the 2012 Olympic Games. He plans to attend law school next fall to pursue a career as a sports agent.