In 1988, Young Liu came to the United States with $89 in his pocket and met the man who would change the course of his life: Ming Leu. 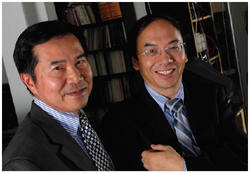 At the time, Leu, the Keith and Pat Bailey Distinguished Professor of mechanical and aerospace engineering at Missouri S&T, was teaching at the New Jersey Institute of Technology. Liu was one of his graduate students. The pair worked together until 1991, co-publishing two academic papers.

Liu was grateful for the mentorship.

“I came from China for graduate study with Ming Leu,” Liu says, “and he treated me like family.”
Liu never forgot his mentor-instructor’s kindness.

“I find Dr. Leu’s research focus interesting and I wanted to support it.” — Young Liu

Today, Liu is chair of Faith Group Co. Inc., one of the largest recyclers of polyethylene terephthalate (PET) plastics in the world. Each year, the company brings in 4.5 percent of the world’s No. 1 recyclable products, processing 350,000 metric tons of soda and water bottles into packaging materials.

When he started the company, Liu saw a niche market.“Fifteen years ago, not many people were into recycling,” he says. “I could get my product at no cost and sell it to make money.”

Founded in 1993 with $3,000 in capital, the company now brings in upwards of $100 million annually. Liu oversees six plants and 12 offices around the globe. Last fall, Liu shared some of his profits with his mentor, donating $200,000 to support Leu’s research at Missouri S&T.

“I find Dr. Leu’s research focus interesting and I wanted to support it,” Liu says.

Through his leadership of the Center for Aerospace Manufacturing Technologies, Leu is involved in a variety of research projects at Missouri S&T, but it is his work with automation and human-computer interaction in assembly plants that caught Liu’s attention.

“My goal is to find ways to develop products quickly and cost-effectively in a virtual world, then actually manufacture the products,” Leu explains.

“It’s fun to be a professor,” Leu says. “You teach the students, but you can learn from them, too.”