Not lost in translation

Andrew Ryan, MS ME’87, insists, well aware of how strange it may sound, that his Spanish classes at S&T sculpted an unpredictable future for this Irish engineer.

To date, Ryan has lived in five countries, worked in 20, and visited more than 50. He is also fluent in eight different languages, but that wasn’t always the case. 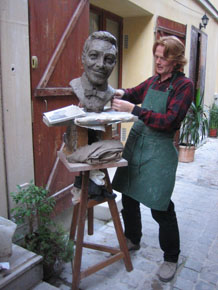 Ryan works on his sculpture “Jean Sablon” in 2006.

After taking out a loan to pay for his airline ticket from Ireland, Ryan arrived in Rolla holding a fellowship and teaching assistant position. He soon befriended numerous other international students; however, the language barrier proved difficult. So Ryan began to audit foreign language classes in hopes of learning to communicate with his new friends more effectively.

“Spanish opened up my mind to different languages and led me to discover other people from different places, and gave me the impetus to travel and discover and not to fear the unknown,” he says.

“Although it sounds far from engineering, at the end of the day, you’re still solving problems,” explains Ryan.

Soon after graduating, Ryan moved to Washington, D.C., to work for a company specializing in digitalizers. He also continued his language studies. “I had a great engineering education at Missouri S&T, but I had a fantastic Spanish professor, Lon Pearson, who was the reason I continued to study other languages.”

Ryan returned to Europe for a brief stint as a researcher at Loughborough University in England before taking a job with PTC, a company known for its Pro/Engineer software. There, Ryan not only used his knowledge of different languages, but also his knowledge of art and design.

“I worked a lot in car design and luxury goods design, being a liaison between the designers and engineers,” explains Ryan, who covered 20 countries, living between Paris, Tokyo, and Salt Lake City. “My father was a sculptor, so I knew about design and art, and I had an engineering degree. It was easy for me to ‘translate’ between the designers and engineers.”

Ryan admits that when he first moved to Tokyo, it was “like being parachuted onto Mars” due in large part to cultural differences. “It took me a while to get my bearings. The only things I recognized in shops were Colgate and Kit-Kat bars.” Within a few months, Ryan adjusted, finding interest in Japanese painting, calligraphy, and wood block painting – for which he developed quite a talent.

After nine years with PTC, Ryan was a casualty of corporate downsizing. Rather than a disappointment, he saw it as his opportunity to go to art school.

“I think people need to educate themselves to seize opportunities when they happen; open the door in front of you, don’t close it,” says Ryan. He spent three years in art school studying sculpting.

During this time, Ryan also managed Chateau de Villette, known as the home of the English professor in The Da Vinci Code. “Although it sounds far from engineering, at the end of the day, you’re still solving problems,” explains Ryan.

He eventually left the position to become an executive recruiter in the luxury field. Now living in Paris, Ryan is a full-time lecturer at a business school. He sculpts in his spare time. “Teaching pays for everything, but I would like to make sculpting more than a hobby.”