Maybe you’ve seen the cartoon on somebody’s office door or wall. A large bird is trying to swallow a small frog. Half of the frog’s body is dangling from the bird’s beak. The frog’s arms are outstretched as far as possible, and it’s making a determined effort to choke the bird. The caption, from the frog’s perspective, reads: “Don’t ever give up.” 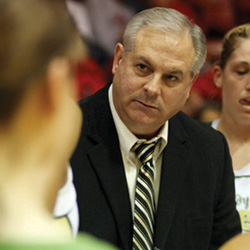 A worn-out photocopy of this cartoon is tacked to the bulletin board in Alan Eads’ office in the Gale Bullman Multi-Purpose Building. The old cartoon is surrounded by more pressing items on the wall, but you get the impression that the basketball coach still looks to it for inspiration on occasion. Eads, a former assistant coach at Southeast Missouri State University and former head coach at Moberly Area Community College, must have needed plenty of inspiration when he took over the women’s basketball program at Missouri S&T in 2002. There had been a few really good Missouri S&T teams in the past, but the situation Eads was stepping into was far from ideal. The program was down, there wasn’t much money in the budget, and Eads, like all S&T coaches, was going to be further hamstrung by the reality that his recruits would have to be willing and able to handle the tough academic environment in Rolla.

Eads’ first two teams went 5-20 and 4-23, respectively. Then some of his new recruits started to become impact players – Nicole Dierking, BSci’07, would finish her career as the Lady Miners’ sixth alltime leading scorer, Jamie Forsberg ended up breaking the school’s all-time record for assists, and Tamara McCaskill emerged as one of the team’s leading offensive threats. These are just three of the many solid recruits who helped Eads turn things around. 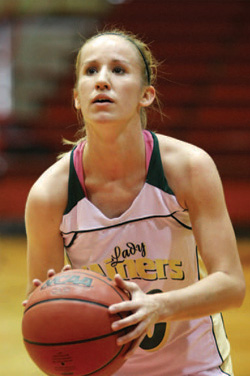 This past year, the Lady Miners had their best season ever. “I could tell we were going to be good during the preseason,” McCaskill says. Both McCaskill, a junior last season, and Forsberg, a senior, look back on a 66-42 home thrashing of Northern Kentucky on Jan. 26 as one of the high points on the 2007-08 schedule. That contest came in the midst of a 10-game winning streak. The Lady Miners were on a roll.

Then came the Drury game in Rolla on Feb. 7. The Lady Miners had never beaten Drury since joining the GLVC. This was huge. Late in the game, with a victory over its biggest rival seemingly in hand, Missouri S&T faltered. Drury staged a miracle comeback that must have sent coach Eads back to his office to stare at the picture of the frog and the bird.

“I couldn’t believe we came that far to just give it up,” says Forsberg.

But they didn’t give up on the season. Even with the sting of the Drury loss still lingering, the Lady Miners prepared themselves for a stretch run that lasted well into March. “There’s nothing you can do about things that have already happened,” says McCaskill, a senior who is majoring in chemical engineering. “You can only control what you do from then on out, and that’s what we did.”

What they proceeded to do was finish the season with a record of 24-7, advancing all the way to the Sweet 16 of the NCAA Division II Women’s National Tournament.

Now that the 2007-08 season is officially in the books, the Lady Miners will have a lot of good memories to look back on. For the time being, though, most of the players are probably too busy training for a new season or pondering post-college plans to spend a lot of time thinking about just how far they’ve come, not only as Lady Miners but also as women athletes in general. 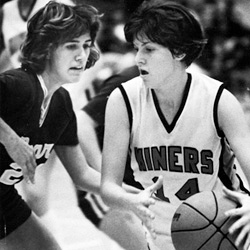 Cecilia (Gutierrez) Elmore, EMgt’86, is one former Lady Miner athlete who has witnessed a lot of progress. Elmore was a walk-on for Missouri S&T women’s basketball teams in the early 1980s that “weren’t very good.” She also played varsity softball from 1982 to 1985. “I started playing competitively on a girls’ basketball team in junior high, right around the time Title 9 was passed,” says Elmore, now the director of the Women’s Leadership Institute at Missouri S&T. “I remember learning that we were on some of the first organized girls sports teams of that era.”

Title 9 legislation required athletic scholarships to be distributed evenly based on the male-to-female ratio at an institution. Since 1975, Missouri S&T has started successful women’s programs in basketball, softball, soccer, track-andfield, and cross country. Last year, the university started a brand new program in volleyball.

Prior to Title 9, college scholarships for female athletes were few and far between. And, culturally, girls were often steered away from sports toward more “lady-like” pastimes. “I think that it is almost the opposite now,” Elmore says. “Girls sports seem to be thriving on all levels, and even things like cheerleading are very athletic. The number of role models for women in sports keeps increasing, and I think that is extremely important for young women today.”

Women’s basketball games, once played before a handful of spectators, have become major sporting events on many campuses. “I think it’s because the talent level is greater,” Elmore says. “So many more young women are getting involved in sports at a younger age. I think the coaching quality at the college level has also definitely improved. Good women’s coaches are highly sought after by institutions.”

In addition to more scholarships, better coaches and players who are more athletic, Elmore thinks the 3-point line and the introduction of a smaller basketball helped the women’s game take several leaps forward. In fact, the women’s game has become so competitive that coach Eads says he rarely even takes the gender of his players into consideration. “You pretty much coach men and women the same,” he says. “It’s basketball. You teach the game, you teach fundamentals and defense.” 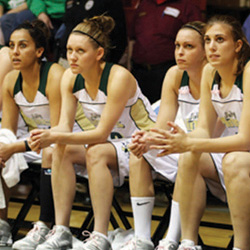 “We might have been that team, we could have been national champions,” Eads says, obviously disappointed that a shot at t
he title eluded his squad at the end.

Yet, there’s something else Eads is hinting at. Just thinking out loud about a possibility like this would have seemed preposterous not too many years ago. But going forward, Eads will tell you that things like national championships are no longer unthinkable. He knows, thanks to his players and the players who came before them, that almost nothing is out of reach.

Of course, there is one important stipulation that continues to apply: You can never give up.