The air up there

Young athletes are often resilient enough to make full recoveries from devastating injuries. Such is the case for Missouri S&T pole vaulter Jordan Henry, who injured his anterior cruciate ligament (ACL) while playing basketball in high school. During his recovery, Henry’s track coach suggested he focus on pole vaulting.

But pole vaulting was not something Henry was eager to jump into. Initially bored with the sport, he showed little interest.

“I would deliberately mess up the drills so our coach would throw me back in sprints and admit that I was no good at vaulting,” says the St. Charles, Mo., native. “The moment he let me leave the ground and start jumping, I began to have much more fun and improved very quickly.” 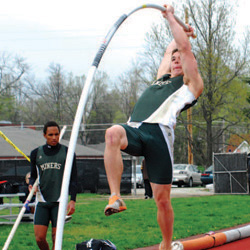 That is a bit of an understatement. Henry now holds the Missouri S&T school record for both indoor and outdoor pole vaulting. In May, he followed up his national indoor runner-up title with a second All-America honor, finishing fourth in the NCAA Division II Track and Field Championship in Walnut, Calif., with a jump of 16 feet, 4 inches.

After being actively pursued by both Purdue and the University of Missouri-Columbia, Henry chose Missouri S&T for its focus on education.

“Academics have always come first,” says Henry, a senior in electrical engineering. “At Columbia or Purdue, I’d have had to sacrifice more of my time and attention to pole vaulting. Here, my coaches understand that academics are truly important to me and take priority over track. Missouri S&T was the perfect balance between athletics and academics.”

And finding the perfect balance has paid off.

Henry was recently named Scholar-Athlete of the Year in men’s track and field by the Great Lakes Valley Conference, one of many highly coveted academic honors he received this year alone.

This spring, Henry was named to the ESPN the Magazine Academic All-District first team, a selection that made him eligible for Academic All-America honors. In June, Henry was selected to the second team. He is one of only nine NCAA Division II student athletes chosen to the squad.