That Gronewald guy is pretty good

Each year, just prior to the NFL draft, serious people with notebooks and stopwatches gather at various venues for “Pro Days.” Ashton Gronewold was determined to impress these people with amazing vertical jumps, broad jumps and 40-yard dashes. Surely some of the scouts were paying attention…This Gronewold guy has skills…But, still, he’s just not big enough, right?

Gronewold is in the best shape of his life, but he doesn’t really look like a professional football player. He knows this. “When I was training for Pro Days in St. Louis, I walked in and I looked just like a lot of the high school kids who were working out,” he says. 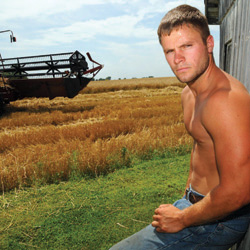 People have been overlooking and underestimating Gronewold’s football skills for a long time. Coming out of Carthage High School in Illinois, he only had a few scholarship offers from small schools. He decided to come to Rolla and play for coach Kirby Cannon. Gronewold got into the third game of his freshman season and, after that, went on to start every game for the remainder of his career at Missouri S&T.

If you follow S&T football, you already know the story. Gronewold was the first player in the 115-year history of the program to earn All-America honors three times. He broke the NCAA single-game record for yards on kickoff returns (295 yards against Tiffin). He holds nearly every Missouri S&T record for receiving, kickoff returns and all-purpose yardage.

During the summers, Gronewold would go home to Carthage (population 2,700) and work on his family’s farm. He baled hay and did other chores to stay in shape. No doubt, folks in town had heard that Gronewold was having a nice college football career over there in Rolla. But a lot of them probably didn’t realize just how good he really was.

Gronewold didn’t get picked in the NFL draft, but he did get a call from the Chicago Bears shortly after the 2008 draft had concluded. They wanted him to come to mini-camp as a free agent.

“When I got the call from the Bears, the TV stations came down from Quincy (Ill.),” Gronewold says. “The whole area got behind it. People I’ve never talked to were calling my parents to wish me luck.” During his four-day tryout with the Bears last spring, Gronewold mainly worked with Chicago’s wide receivers coach Darryl Drake, but offensive coordinator Ron Turner and head coach Lovie Smith were also watching. “I picked up the offense real fast,” Gronewold says. “I knew it was my only chance.”

He made a few solid catches that garnered him compliments, and he worked on punts and kickoff returns. But the Bears had brought a lot of big time receivers to the mini-camp, and the job of returning kicks in Chicago is currently held by Devin Hester, one of the best kick returners in the NFL. Gronewold returned to Rolla, where he’s finishing up a degree in engineering management, without an NFL contract. But it would be foolish to underestimate him at this point, and he doesn’t think his football career is over. This summer, he went back to the farm to stay in shape and wait for the next professional opportunity.

“I’m going to try out for some arena teams,” says Gronewold, who has secured an agent. “That’s the plan.”