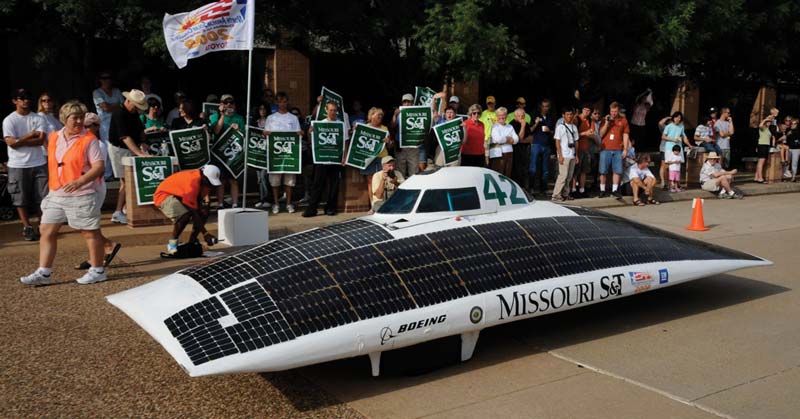 Long summer trips often take a toll on road warriors. This is especially true when the road trip in question is a 2,400-mile journey through two countries over 10 days — while going an average speed of about 45 mph.

Electrical problems, cloudy weather, a Nebraska house fire and slaughterhouse stench in Sioux Falls were just a few of the things the Missouri S&T Solar Car Team managed to overcome during the 2008 North American Solar Challenge, which started July 13 in Plano, Texas, and finished July 22 in Calgary, Alberta. The team ultimately made it to the finish line at the University of Calgary in seventh place.

Overnight on Day 3 in Nebraska City, Neb., a set of charging lithium ion batteries caught fire in the home the team had camped in. Though the fire was quickly extinguished, six team members were taken to a local hospital as a precaution. All were released from the hospital in a matter of hours, and the exhausted travelers decided to resume the race.

On Day 4, despite smelling of smoke and yearning for sleep, S&T made it all the way to Sioux Falls, S.D. From there, they began the slow trip to the Canadian border under cloudy skies. By the time they reached Winnipeg, Manitoba, the well-funded University of Michigan team had opened up an insurmountable lead, and most of the teams were just trying to make it to Calgary somehow.

On the morning of July 22, Solar Miner VI rolled out of Medicine Hat, Alberta, and raced to Calgary under sunny skies. Team leader Daniel Welty, a senior in computer engineering, felt like the last day of the race was S&T’s best. “We drove almost the entire day without a stop,” he said. “That was a very nice feeling.”

Now that it was over, team members were already forgetting about some of the hardships of the road and starting to think about the stories they’ll have to tell when their college days are done and they’re embarking on successful careers. “It was a lot of hard work and energy and effort,” says Cody Massar, a senior in engineering management. “But it was a lot o f fun.”